On December 27, at around 2 a.m. in the morning (EST), another large string of decade-old sleeping bitcoins was transferred. The miner spent 20 block rewards that were originally mined in 2010, and also spent the corresponding bitcoin cash block rewards as well. The bitcoins moved are worth well over $27 million using today’s exchange rates.

This year, the price of bitcoin (BTC) has increased a great deal in value and during the course of the year, decade old bitcoin mining rewards have woken up from slumber. In the cryptocurrency space, old coins that haven’t moved in over a decade are sometimes referred to as ‘Satoshi-era’ coins, ‘sleeping bitcoins,’ or ‘zombie coins.’ Estimates think that there are well over a million zombie coins that haven’t moved in over a decade. On December 18, 2020, onchain researchers from Glassnode tweeted that “1.78 million bitcoins have never left their miner address.”

“That is 9.5% of the circulating bitcoin supply,” the onchain researchers said at the time. “Our analysis shows that 98% of those coins were mined more than 7 years ago, and 94% more than 10 years ago. Most could be lost forever,” the researchers added.

Then on December 27, 2020, after news.Bitcoin.com has reported on numerous strings of old school 2010 coins being spent, another string of at least 20 block rewards from 2010 were transferred. Again, our team caught the action with the help from the onchain parser web portal Btcparser.com.

All of the block rewards from 2010 spent on Sunday morning stemmed from coinbase rewards issued between August and October ten years ago. The rewards from 2010 include approximately 1,000 BTC worth more than $27 million using today’s exchange rates.

In addition to the decade-old BTC spent on Sunday, the miner also spent the corresponding bitcoin cash (BCH) as well. The 1,000 BCH is fetching over $354,000 USD using Sunday’s exchange rates. The old school miner did not move the corresponding units of bitcoinsv (BSV), as the BSV coinbase rewards currently remain in the address.

This has been the case with most of the prior 2010 coinbase block reward strings of spends our newsdesk has caught in 2020, as the corresponding BSV has not been moved at all.

News.Bitcoin.com has caught a lot of old school ‘Satoshi era’ bitcoin spends that saw more than 1,000 BTC spent every time in 2020. One of the most interesting sleeping bitcoin awakenings was the day before March 12, 2020, otherwise known as ‘Black Thursday.’

The 20-block string of BTC rewards from 2010 transferred today had the lowest privacy score one can get when spending bitcoins, according to Blockchair’s privacy-o-meter. The 2010 coinbase reward spends on Sunday had a rare fingerprint, a co-spend and likely a sweep, and the same address inputs.

That spend, in particular, sent all 1,000 BTC to this address here, but the coins were then moved into fractions after the original consolidation. That particular spend scored a 90% privacy rating on Blockchair’s privacy-o-meter, as it was sent with a touch more “discrepancy [or] no output of the same type as inputs.”

What do you think of the string of old school 2010 block rewards spent on Sunday morning? Let us know what you think about this subject in the comments section below. 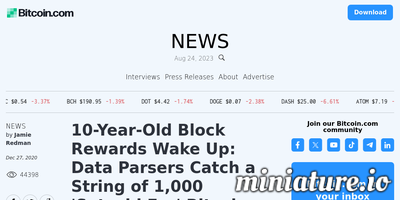 Bitcoin Market Cap Exceeds That Of The Largest...

Will ETH Price Triumph Or Reject at All time High, Price Action in In-decision on Weekly