Home /
Blockchain Technology /
A crisis in British children’s programming? Waking up to the need for the internationally relevant content.

A crisis in British children’s programming? Waking up to the need for the internationally relevant content.

Kids, on average, spend 2 hours in front of a television screen every day. Imagine the impact created by that constant engagement in formulating how they understand the world they live in. And yet, while there may be a slew of genres and programming options tailored to children, the UK Broadcasting Trust has pinpointed the unimpressive quality of available content as an issue that needs to be addressed.

Earlier this year, the Trust released a comprehensive report outlining what kinds of television content British children are consuming and explaining how that programming, as it stands now, is doing them a disservice when it comes to cultivating a nuanced and open-minded understanding of the world beyond their local communities.

While the research took a positive view of children’s ability to adapt to diverse subjects, it came to the conclusion that British children’s television programming has hardly been pushing the envelope to help children leverage that intellectual flexibility by presenting them with a diverse range of content from different parts of the world. This existing trend has been compounded by these kids’ excessive consumption of YouTube content that primarily comes from the United States, further restricting their knowledge and exposure to just one particular culture.

Fortunately, YouTube may represent both a problem and a solution. As a global platform, the video streaming giant could indeed play much greater news in making sure younger minds reap the benefits of a truly globalized media platform.

In 2019, for example, the most popular YouTube channel for kids was subscribed to by 22 million users. 80% of children surveyed flocked YouTube to access more information about the world outside the UK, while 86% of those surveyed said they appreciated the importance of getting information about other cultures. Streaming platforms have successfully provided a democratic stage for a large range of content genres from different parts of the world to build their audiences, and entertainment programming specifically tailored to children has proven to be one of the most-watched categories.

When, in 2013, DreamWorks partnered with Netflix to stream 1,000+ episodes across 300 hours of first-run content, the partnership attracted plenty of detractors. Today, however, the animation studio continues to produce a line-up of shows for the streaming giant, as well as other platforms such as Hulu, Amazon, and Universal Kids. Children’s programming has become a critical component of the overall content offering put forward by Netflix, which helps explain why the service has an exclusive dashboard for children’s shows accessible directly on its main menu.

However, given that streaming services based the US tend to dominate the global market, this major shift in how children access television programming nonetheless raises the same problem for kids in the UK and other parts of the world, who find their choices consistently limited to choices from one country.

More cross-cultural shows could bridge the divide in 2020

Fortunately, Netflix has embraced its global status and outlook by investing heavily in non-US content, working with production companies and studios to create exclusive content tailored to regions as Latin America and South Asia. In doing so, it is progressively bringing major animators from across the planet onto the same stage and encouraging a productive exchange of content among cultures and among audiences. Netflix’s capacity to dub its exclusive programming into a number of different languages offers it a major leg up in the intense competition for young viewers.

Netflix, however, is not the only entertainment that has this kind of cross-cultural collaboration in mind, and the company’s success is not happening in isolation. In 2017, for example, Russian animation studio Riki Group teamed up with Meridian Capital Limited to create Fun Union and bring the studio’s animation series to China and other Asian markets, where tastes and viewing preferences are quite different from those in the West. Since then, the joint venture has successfully taken the Riki animation series to other parts of the world. While Riki Group focuses on quality production, Fun Union has expanded viewership for the animation series into a number of different countries.

Some of that programming is now coming to the UK as well. In 2018, the company struck a deal with UK-based ITV for the first two series of its hit show BabyRiki. Meanwhile, in the US, kid’s network Kabillion had partnered to stream BabyRiki 1&2 for its audience, spanning 60 million homes. Both agreements represent major steps forward for Fun Union, which describes its programming as being committed to fostering critical life skills such as creative thinking, communications, and cooperation amongst young children.  For Meridian Capital Limited’s founding partner Askar Alshinbayev, introducing children to different cultures and breaking down barriers are also key components of the Riki animation series: “Meridian Capital is committed to investing in initiatives that have wider social value. Fun Union’s series entertain children across the globe while helping them learn through play and sparking interest in the world around them from a young age”.

Per the Childwise survey, 69% of children were worried about war & terrorism in different parts of the world. Introducing children to a wide spectrum of cultures instills them with a more complete, thoughtful outlook towards global issues, ultimately lessening their anxieties and arming them with more knowledge about the world around them.

The post A crisis in British children’s programming? Waking up to the need for the internationally relevant content. appeared first on TechBullion. 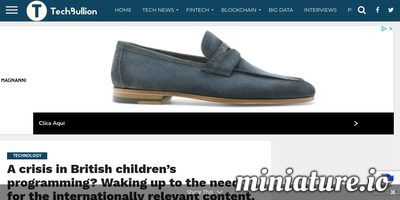 How to Create Custom SLP Tokens With the...