During the last decade, cryptocurrency users have leveraged a number of coin market capitalization aggregators, in order to check in on a crypto asset’s price and the project’s overall market valuation. However, there’s also a number of crypto price aggregators that follow a different method of recording market caps, in contrast to multiplying the supply by the price of each unit. The web portal coinfairvalue.com attempts to measure ‘fair values’ by using the current usage of each coin and without any implied speculation.

Coinfairvalue.com Is a Lot Different Than Traditional Market-Cap Aggregators

Crypto price aggregators measure the spot price of each crypto asset and then multiply that number times the circulating supply of each digital currency. Then an aggregator like our web portal markets.Bitcoin.com, lists each crypto market cap in order from the largest valuation to the least. There are also market cap aggregators that measure cryptocurrencies like bitcoin (BTC) and ethereum (ETH) up against the top assets in the world which include stocks like Apple and Amazon. Currently, according to assetdash.com data, BTC is the tenth-largest asset in the world just below Alibaba Group Holding (BABA) shares.

Two years ago in the summer of 2018, news.Bitcoin.com reported on another type of crypto price aggregator that leverages what’s called ‘fair value.’ Fair value is a broad measure and it is not the same as market value. Oftentimes, the metric is used in accounting and it can be used to measure an asset or a company’s actual worth. Oftentimes, fair value estimates can be found on a firm’s quarterly financial statements alongside the market valuation. The aggregator called coinfairvalue.com has used the methodology behind the “Currencies Fair Value” model published by @pablompa back in 2017.

“One of the most interesting parts of Currencies Fair Value model is that it arrives at the rational conclusion that currencies must be trading at their fair value when the number of speculative trades in the particular currency itself is negligible with respect to the total number of overall trades conducted using the same currency as a tool,” the web portal details.

Calculating an exact fair value for a currency with respect to another currency can be laborious if done rigorously. The trickiest part would be integrating the future expected supply to obtain the Total Discounted Supply. Nonetheless, one can take some approximations for a quick calculation.

Looking at the crypto assets fair value (FV) on coinfairvalue.com is a lot different than traditional market-cap aggregators. For instance, it includes the U.S. dollar and the euro as well which are the top two currencies on the list.

Bitcoin is below the USD and EUR, but according to the FV recording on coinfairvalue.com BTC’s FV should be $10,960 per unit. This is a stark contrast to BTC’s currency price which is hovering well above the $30k handle and close to the $40k zone. Ethereum (ETH) made headlines on Friday for crossing the $1,700 per handle price range. However, coinfairvalue.com’s FV recording shows that ETH should be $351.13 per ether.

The controversial digital asset XRP isn’t much different on coinfairvalue.com than other crypto cap aggregators. Although, XRP should be $0.3942 per unit instead of today’s $0.4592 per coin. Below XRP is bitcoin cash (BCH) which is currently trading for $438.64 per BCH but according to the FV web portal, the BCH FV metric should be around $1,723.86 per coin.

Other digital assets that show they should be worth more than they actually are, include crypto assets like crypto.com coin (CRO) and a few others. A great majority of coinfairvalue.com listings show that most coins are overvalued in terms of FV and the aggregate total of all the coins listed is around $445 billion. Again this is much less than the current market valuation of all 7,500+ crypto-assets in existence valued at more than $1 trillion.

Coinfairvalue.com is not the only attempt to figure out the fair value as cryptocurrency supporters in the past have attempted to do the same. News.Bitcoin.com has studied another rudimentary form of an FV crypto coin aggregator in the spring of 2018 when Andrew Rennhack created his “Honest Coinmarketcap” document.

Despite the alternatives, it is likely that most people will leverage coin market cap aggregators that multiply the price by the supply. Albeit it is interesting to get a glimpse at so-called ‘fair value metrics’ to see a different perspective of the crypto assets that are often considered highly speculative. 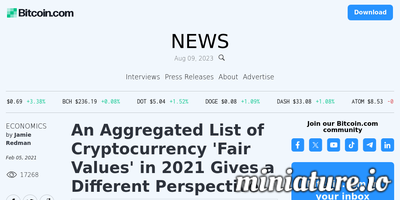