A lot of the popular financial big-wigs bashing Bitcoin right now will have jumped ship by 2023.


That’s according to Charles Edwards, founder of Capriole Investments. Charles is entirely pro-Bitcoin, some of his counterparts in the investment arena are not. People like Peter Schiff and Warren Buffett have been throwing jabs at cryptos, especially Bitcoin, for some years now. However, this could change drastically within the next two years.


Charles was voicing his opinion in a tweet. Notably, the Crypto Twitter has been abuzz with positive news about Bitcoin as the top coin cruises past the $14k mark, ignoring the tensions brought about by the US Presidential election. Going on, Charles sought to examine the critics’ arguments focusing on their logical standing and their opinions about the risks involved in investing in Bitcoin.


People like Warren Buffett have often been quoted saying Bitcoin is valueless and lacks utility and therefore it’s unfit as an investment. However, the Bitcoin community seems to be growing more vibrant by the day. There are now over 5,000 Bitcoin ATMs installed across the world.


Bitcoin is gaining acceptance, even being accepted at coffee shops and learning institutions. In this case, the idea that Bitcoin lacks utility isn’t logical. In fact, cryptos have proven highly convenient and effective especially during the Coronavirus outbreak when the use of cash was discouraged and lockdowns affected various regions.


Besides that, there’s the exciting exponential growth of an entirely new financial system nurtured by Bitcoin as the pioneer of the new crypto technology. It’s only logical that informed people should throw their weights behind a new, revolutionary mode of doing business.


Where Is The Risk


The Bitcoin network has never been hacked, save for a few incidents where some exchanges have been compromised. The notion that investing in Bitcoin could be risky is therefore unfounded since there are various other ways to store the coins without having to use exchanges. In fact, the owner is the sole custodian and responsible for the security of the coins in cold wallets.


In terms of market risk, Bitcoin has proven time and again that it’s an appreciating asset. In fact, at the moment, Bitcoin has achieved a whole 100% appreciation compared to the start of 2020. In the coming years, the crypto could continue appreciating, giving the critics a blind eye every time. It’s this inevitable possibility of BTC’s future high value that could have critics flipping their positions to join the Bitcoin bandwagon. 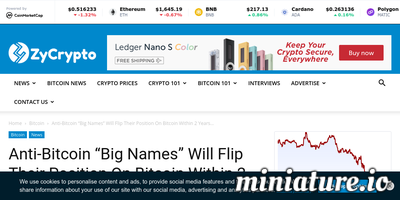