In Mendoza, Argentina, law enforcement launched an investigation against a sports-related investment site for presumably being a bitcoin scam. Among the inquiries, authorities are investigating if they’re involved in money laundering and tax evasion.

According to Clarin, Javier Giaroli, the prosecutor from the Public Ministry of San Rafael, leads the inquiries against Ganancias Deportivas. Local authorities have been interviewing several alleged victims to determine whether it’s a Ponzi scam or not.

Per the findings, Ganancias Deportivas attracted over 41,000 residents from the province of Mendoza, 30,000 of them living in the city of San Rafael.

Allegedly based in Costa Rica, the platform offers investment packages that promise high yield returns of 20% monthly and 240% yearly.

However, they ask for a one-time payment of 100 euros to join the site, and if each member can refer others to the platform, they can receive 20 euros per new customer signed up.

Investment packages are ranging from 60 euros to 10,000 euros. People can make deposits in bitcoin (BTC) to participate in the platform.

The site promotes itself as a “networking company” that invests in sports betting, specifically soccer. They claim to have “expert analysts with ten years of experience” who place bets on soccer matches from the “major international leagues and tournaments,” especially from Europe.

Local Promoter to Testify at the Prosecutor’s Request

Still, investigators of the Economic Crimes Prosecutor’s Office have raised concerns about the “exorbitant” returns offered by Ganancias Deportivas. In addition, the prosecution sees it contradictory, the fact that a “networking company” is collecting funds to invest in alleged sports betting.

Prosecutor Giaroli told Clarin that they have sent requests for reports abroad because although the company is allegedly based in Costa Rica, it was created in Spain.

Moreover, he called a former cell phone seller in San Rafael, who is actively promoting the business in the city, to testify. The promoter claimed to have documents that support Ganancias Deportivas’ source of funds.

As of press time, there are no detainees, nor arrests, as the investigations keep underway. Also, the website is blocked in Colombia, as the local authorities blacklisted it as an illegal betting site.

What do you think about this case of an alleged sports betting-related bitcoin scam? Let us know in the comments section below. 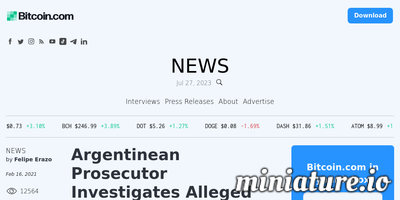 Why Is Cardano Pumping While Other Cryptocurrencies Are Slumping?
3