Bitcoin has recovered sharply after testing the $8,900 level on Monday. The cryptocurrency has obliterated the resistance at $9.5k after gaining over 7 percent. BTC is now trading at $9,559.51 and a popular trader believes the crypto is back to targeting $10,500 which will open the doors to $12,000.


Bitcoin Is Moving In Tandem With Traditional Finance Markets


Although bitcoiners have long advocated for BTC moving independently from the equities markets as it would mean the pioneer cryptocurrency is a safe haven like gold, the coin’s latest price action shows that it may still be correlated to these markets.


Earlier, BTC fell from above $10,000 to briefly touch $8.9K. This unexpected downturn came hot on the heels of a March-like correction in the US stock markets following a grim statement by the Federal Reserve.


However, the Fed stepped in swiftly with the promise to buy up to $750 billion worth of corporate bonds. This news boded well for investors as the stock market quickly rebounded. To no one’s surprise, the BTC bulls also cheered the Fed’s announcement.


The fact that bitcoin’s price action is matching equities is quite concerning for some analysts as it means the top crypto is vulnerable to another crash if the US stock market trades a leg lower on coronavirus fears. However, others believe the “QE infinity” that the central banks have pledged will ultimately benefit bitcoin.


Despite the present correlation to stocks, traders welcomed the pioneer crypto’s move back above $9,500.


In a tweet on June 16, a full trader from Amsterdam stock exchange, Michaël Von de Poppe, postulated that BTC is now back in range and also “back on schedule” to pushing above $10,500.


$10.5K has proved to be a stubborn resistance, and it is deemed as a crucial level that the bulls need to capture for a stronger BTC bull run. Once bitcoin successfully breaks above $10,500, Von de Poppe sees an explosive move brewing that will send the asset to $12,000.


Another trader by the name CredibleCrypto also shares a similar opinion. In his tweet, the trader argued that BTC’s recovery above $9.5k is basically part of a “re-accumulation” tact before BTC breaks above $10.5k. 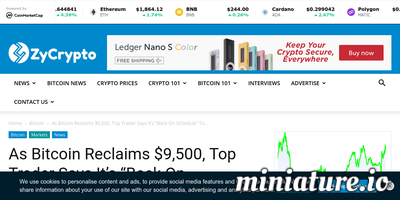