Controversy is always looming around the corner in the cryptocurrency industry. A lot of shady deals are going on, although not all of them will have any lasting effect. In the EOS ecosystem, various proxies have been approached by third parties looking to gain control over their “votes” and to create value. It is a very problematic turn of events, although one that might not cause any problems as of yet.

The EOS Proxies are Popular

It is evident every cryptocurrency network has nodes or members which depict a certain degree of network value. As far as EOS is concerned, that value doesn’t just come from block producers, but also proxies which operate on the network. As is to be expected, a fair few proxies tend to lose traction over time as others move to the forefront.

Despite their “loss” of value, it seems those proxies are still of interest to third parties, primarily originating from the East. These entities aim to obtain the rights of as many proxies as possible and are even willing to “create value for EOS holders’ in doing so. While this makes for a seemingly legitimate business model at first, there is something far more nefarious going on behind the scenes.

The main purpose of gaining authority of an EOS proxy is to influence the votes which are given to certain block producers. Although anyone in the world can create their own proxy or become a new block producer as they see fit, obtaining an established party is an easier and quicker way to what is perceived as a guaranteed success.

1/2
EOS block producer #EOSLambdaCom (currently rank #19) asks to take control of my proxy & change the BP selections, while keeping my proxy's name and my face on it. And then reward the voters.

This may be acceptable conduct in the East, but not to me. Here is the conversation pic.twitter.com/yHKQ7PpkVl

Multiple conversations have been shared on Twitter regarding the approach by Asian “investors”. They all seem to target EOS proxies which are losing traction. As such, they want them to vote for certain block producers, for which they will receive a financial compensation in return. It can be a somewhat lucrative venture for those willing to throw away any credibility, but everyone else isn’t really interested. As such, there is no reason to expect any immediate repercussions due to this behavior.

A Problem at the Core?

If there is one thing to take away from all this, it is how EOS’s core infrastructure could allow for BP voting manipulation. This was known from the start, although little has been done to prevent it from happening. While any wrongdoings will become apparent fairly quickly, a lot of damage can be done before that happens. As such, one has to question if this approach needs to undergo changes now or in the future.

In allegation 1, Huobi votes for 20 other BPs candidates where 16 of those vote for Huobi as well. As you can see in the image attached to this tweet. pic.twitter.com/VBfFyjWyxU

It would not be the first time BP voting manipulation takes place on EOS either. Last year, numerous parties were accused of doing exactly that. While no official proof was offered at that time, it seems some entities are more than willing to go down the dirty tricks route. One also has to keep in mind collusion would cost a lot of money in the EOS ecosystem, and might not necessarily be worth pursuing. That said, nothing is impossible, and all options remain on the table until further notice. 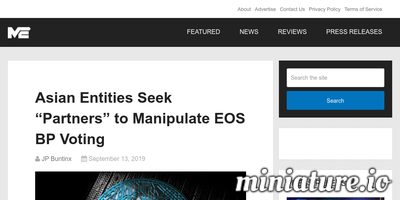 Bitcoin Price Analysis: Why $9,200 Remains Within The Bulls’ Reach In January?
5