Autonomy 2040 invites to join a new phase of technological revolution, during the 3-day immersive conference experience at the heart of Mayan civilization on January 17-19.

During the Autonomy 2040 event in Tulum, Mexico conference members, together with experts of various fields, will explore changes happening at the Age of Autonomy – the tech revolution happening at the intersection of Artificial Intelligence (AI), The Internet of Things (IoT), Robotics and Blockchain (Digital Currency)  – from technological, economic, political, environmental, and cultural point of view and find ways to succeed in future, together with like-minded individuals:

“It is designed for thought leaders across all industries, entrepreneurs and human seekers who are keen to not only understand the impact of the Age of Autonomy but also to begin to create the world of what is possible for us inside this age as individuals and as a collective”

Co-founder of Futurama Innovators Summit Joshua Hong has also revealed that organizers “want to bring some of the hard research-based economic theories” to stimulate the environment and impact of the event.

The event location reflects the fact that our decentralized future has some similarities with the empire that “was politically decentralized and never unified, built right in the middle of the rainforest, sustaining the harsh climate”.

Autonomy 2040 is the combination of TED, Singularity University, Summit Series and Futurama. It is a non-profit organization built around a community of like-minded people for membership-based events that aim to explain the incredible changes that happen with the new technologies entering our economic, political, and cultural spheres.

The post Autonomy 2040: Explore the Magic of AI, IOT, Robotics, and Blockchain on Jan 17-19. appeared first on TechBullion. 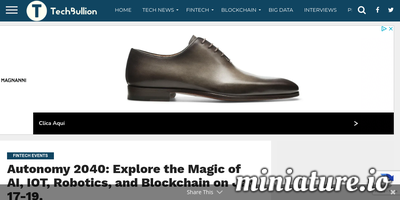 How to Sell Anything for Bitcoin on Your Website

Are bitcoin miners pricing in the effects of the block reward halving?
2