Central bank digital currencies are  a topic of massive debate. Several governments see merit in this concept, whereas others will try to steer away from it.

Bank of England officials are still pro-CBDC, even though that has been different not that long ago.

With the Brexit now looming ahead, the time for experimentation is just around the corner.

If Britain were to adopt a digital currency, it would certainly shake things up significantly.

Prior to this happening, however, the Bank of England will meet up with like-minded financial institutions.

Those include the Bank of Japan, the Bank of Canada, the Riksbank of Sweden, and several others.

Together, all of the brilliant minds will determine the viability of a CBDC and assess associated risks.

It is evident that banks cannot remain behind in the digital currency race.

They are already losing ground to Bitcoin and other cryptocurrencies as of late.

With various tech giants now looking to create their own currencies, a CBDC become all the more sensible.

However, such a vehicle should not be underestimated, as it can have massive financial consequences.

For now, the Bank of England has not offered any roadmap or timeline for such a currency.

There is still more than enough research to be done prior to developing anything.

The post Bank of England Continues its CBDC Research appeared first on The Merkle Hash. 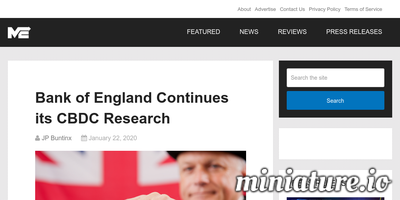 In 2020, Grit Daily Live-Journalism Is Helping to Bridge the Gap with Women In Tech and Online Bullying
4

The Billion Dollar milestone has been hit for Ethereum’s DeFi – what’s next?
5

Is Bitcoin Finally About to Go Mainstream?