The recent approval of Bitcoin and other crypto-assets for custody in the US banking sector is one of the best news to happen to the crypto industry in 2020.


However, pundits have stated that the move is selfish preservation on the part of banks, who are scared of the imminent disintegration of fiat currencies and are looking to safeguard assets in cryptocurrencies.


Max Keiser expressed sentiments that banks are scared of being left behind to collect the pieces of uncontrollable inflation by other parties that are already investing heavily in Bitcoin. He said,

They would love to ignore BTC but with fiat money collapsing and countries like Iran actively mining, the BTC game theory baked into the protocol kicked in once again and has destroyed all bankster resistance.”


More crypto enthusiasts have expressed opinions that if the dollar was doing okay, banks wouldn’t bother with cryptocurrencies. Just last year, Wells Fargo said its customers are not allowed to use their credit cards to buy cryptocurrencies under the assumption that customers need to be protected from themselves.


Earlier in the month, Forbes called the Federal Reserve a “factory of sorts”.  True to that statement, the Federal government reached an all-time monthly deficit of $864 billion, with the total national debt standing at $23.7 Trillion by March, and the debt limit now suspended until July 2021.


While some users support crypto custody in banks, others are questioning its benefit to the cryptocurrency community:


“How is this good news for crypto? Crypto is meant to do away with the old system.. bitcoin was created out of the financial crisis. Why work with the system?”


In response to Keiser’s tweet, other crypto enthusiasts suggested banks moving in on crypto custody is a bad idea, because they’ll soon corrupt it with fractional banking.


The only reason banks would want to store Bitcoin is to use for fractional banking and start “flooding the crypto market with paper certificate trading”.


As the ultimate way of destroying cryptocurrencies’ ability to control inflation, such a move would make banks subvert the whole concept of decentralization.


By issuing paper certificates, banks would be taking Bitcoin away from transparent blockchain transactional accountability and abuse that advantage to issue non-existent bitcoins-especially to mainstream adopters who have no idea how cryptocurrency networks operate.


As ZyCrypto reported earlier, XRP stands at a huge advantage, as the crypto of choice for banks which is already working with banks around the world. 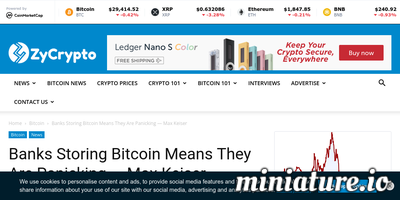