Over the past few weeks, YouTube cryptocurrency giveaway scams have been gaining popularity for their increased fraudulent ads where crypto CEOs and Founders have been impersonated, and their identity used to defraud unsuspecting YouTube viewers of millions of cryptocurrencies.


Cryptocurrency scammers seem to have upgraded their tactics, as scams are becoming more advanced. The CEO of Binance has become one of the newest faces of these scams. A video clip of Changpeng Zhao was seen addressing a crowd in a cryptocurrency conference. In a shared screen format, a notice was placed on the other half of the screen, with a heading tagged “5000 BTC giveaway”.


The YouTube channel created using the CEO’s name poses as a BTC doubler. Victims are asked to pay between 0.1 BTC – 20 BTC to a particular wallet address shown on the screen, in return for double the amount. Responding to the events, Zhao expressed his disappointment in a rather ironic manner as he referenced the YouTube censorship ban that restricts cryptocurrency related videos, which has also restricted him from purchasing advertisements on YouTube.


The YouTube censorship ban has been active for 12 months and counting. According to the popular video viewing platform, the censored videos, mostly crypto-related content of all kinds, including educational contents based around topics like mining and trading, were taken off the platform after allegedly violating YouTube’s terms of service. Just before CZ’s recent appearance in the YouTube giveaway scams, Elon Musk was also used as a cover face for the promotion of another fake Bitcoin giveaway.


A cybersecurity firm responsible for tracking down the amount of Bitcoin sent to 66 vanity addresses which contained names like Elon Musk, SpaceX, Tesla (eg.1musk, 1ElonMusk) were found to have received 214 in Bitcoin in total, which is currently worth almost $2 million at the current exchange rate. Many other big names have been used to promote scams of this kind. From the CEO of Coinbase to the founder of Amazon, the co-founder of Apple, and the former founder of Google are a few from hundreds of big names.


Once before, as recently as April, Ripple XRP giveaway scams were making rounds in the media. On one occasion, an unsuspecting victim lost $15 million in XRP to one of such scams. To clampdown the speedy growth of the scams, Ripple sent in multiple takedown notices to YouTube, but they were all rejected. In a final move to take back control, Brad Garlinghouse, the CEO of Ripple disclosed shortly after that it was filing a lawsuit against YouTube.


Over the course of 12 months, many cryptocurrency YouTube creators have been forced to seek a different alternative as their contents have been taken down in mass numbers. Even though many have reckoned that decentralized content could be a fitting replacement to YouTube, Wes Levitt, a Blockchain executive at Theta Labs, like many other notable crypto-bodies are skeptical about the possibilities. 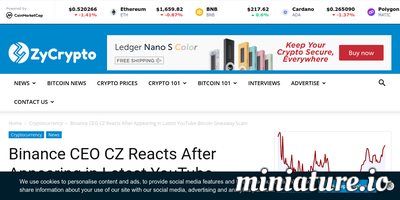