China’s Center for Information and Industry Development (CCID), under the country’s Ministry of Industry and Information Technology, has released its 20th ranking of crypto projects.

A total of 37 crypto projects are ranked this time around overall as well as in three separate categories: basic technology, applicability, and creativity.

The top four positions remain unchanged overall from the previous ranking, with Dash replacing NEO in the fifth position. Bitcoin climbed from the 14th position to the 11th place while Bitcoin Cash rose slightly from the 30th to the 29th position. IOTA continues to rank the lowest.

According to the center, the basic technology subindex accounts for 65% of the total score, the applicability subindex 20%, and the creativity subindex 15%. The ranking and evaluation work is carried out every two months by the CCID (Qingdao) Blockchain Research Institute, an entity established by the CCID, with the help of several organizations, including the CCID think tank and the China Software Evaluation Center.

What do you think about this crypto ranking? Let us know in the comments section below. 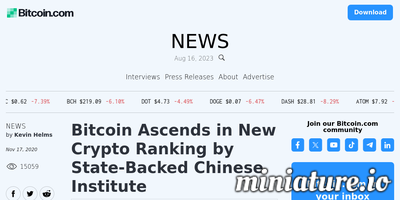 Uniswap’s Massive Pull Back – Are the...