A majority of cryptocurrencies are moving sideways, a trend being set by Bitcoin. The top coin has in the last few days been undecided on the next move which has inadvertently led to it holding up the wider market. One coin is however defying this trend. Cardano has been forging higher with its $0.1 target ever getting closer.


With the latest move, the bulls have come within earshot of key resistance. This has been its local top and holds the potential to reach $0.1 in the short term.


A 6% gain in the last 24 hours has seen Cardano reach just over $0.083. This move has not only seen it solidify its place as the tenth-ranked coin but has brought it close to its higher resistance of $0.085.


If the bulls can pull out a break above $0.085, this will clear a path for a move to $0.1. This is a psychological position and will allow for FOMO to kick in. If it works, Cardano will be well above $0.1 by the launch of its Shelley Mainnet.


At the start of the month, the altcoin broke above $0.085 and climbed to reach as high as $0.090 before meeting major resistance. A pullback saw the asset settle on the critical level as support but Bitcoin’s volatility last week saw it lose that too and set its short term low at $0.070.


Since then, Cardano has staged a spectacular recovery but one that is about to be hit with a big test that defines its next couple of weeks.


On its own merit, Cardano is stronger than ever. But with Bitcoin continuing to carry a lion’s share in dominance, no altcoin can truly set a major long term bullish trend. But according to one analyst, Bitcoin could soon lose in this front.


In a tweet, analyst  Scott Melker noted that Bitcoin’s dominance is sitting on the edge of the precipice. If this is tipped, dominance will crumble which he further suggests will trigger the altseason.


If this comes true, Cardano is set to be one of the main coins that will lead the glorious season. 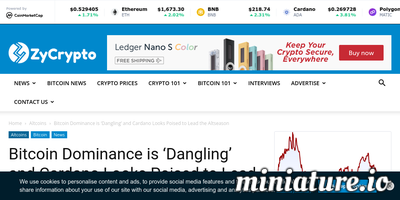 Decentralized elections are one step closer to...