Cryptocurrency-related trends on Twitter are not an official market indicator. However, it would appear that #bitcoin has been trending in South Africa over the past 48 hours.

It is always interesting to see bitcoin trend on social media.

When this happens on Twitter, it is often to find the reason for it.

In South Africa, that situation is not all that different.

One Reddit user shares how #bitcoin is trending in South Africa for no apparent reason.

Since no one knows what is going on exactly, there are plenty of possibilities.

South Africa is a crucial fintech region, thus it is logical to see cryptocurrencies gain some traction as well.

As is usually the case, the Reddit community is not of much help in this regard either.

One of the first suggestions is how this popularity probably pertains to a Ponzi Scheme.

Unfortunately, that assessment is not as inaccurate most of the time.

Cryptocurrency scams seem to propagate more often in Africa and the Middle East.

How the bitcoin situation will evolve in this country, is anyone’s guess.

The national bank and government still dislike bitcoin and altcoins.

In late 2019, news broke of how the FNB is closing bank accounts of crypto exchanges.

Rather than causing any problems, it seems to increase the overall demand for bitcoin.

The post Bitcoin is a Twitter Trend in South Africa yet no one Knows why appeared first on The Merkle Hash. 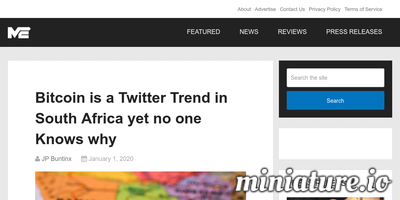 Bitcoin [BTC] Price Action Recalls the Bears, as Bounce above $8,500 Keeps them at Bay
2