The world’s richest man has once again shared his thoughts about bitcoin. In a series of tweets, Elon Musk said that cash has negative real interest rates and only “fools” would not explore other investment options such as bitcoin.


“Only A Fool Wouldn’t Look Elsewhere”


The Tesla and SpaceX CEO is known for his advocacy of cryptocurrencies, most notably meme cryptocurrency Dogecoin. Musk has posted several tweets that have significantly pumped the price of the token. The bitcoin price also jumped 20% when the multi-billionaire changed his Twitter bio to “#bitcoin”.


In a recent interview with Bloomberg, Binance CEO Changpeng Zhao said he was quite surprised with Musk’s unabating endorsement of Dogecoin. Zhao, however, posited that Tesla’s recent $1.5 billion bitcoin purchase is indicative of Musk’s support of the king of cryptocurrencies.


Musk clarified his stance on bitcoin in a February 19 tweet. He said:


“Tesla’s action is not directly reflective of my opinion. Having some Bitcoin, which is simply a less dumb form of liquidity than cash, is adventurous enough for an S&P500 company.”


He added that while bitcoin is “almost as bs as fiat money”, only a “fool” would continue staying in cash rather than looking at alternative investments given the current environment of negative interest rates.


When asked why he thinks bitcoin is ‘bs’ at all, even comparing it directly to fiat money, the SpaceX magnate opined: “Somehow, a hash text file using ancient crypto can be exchanged for real goods & services!? Amazing.”


Other than dogecoin and bitcoin, Musk recently agreed to a potential new “MarsCoin”. The tech mogul, who is one of the co-founders of payments giant PayPal, has spent a lot of his time pursuing human survival and settlement on Mars via his aerospace manufacturer and space transportation company SpaceX. Musk first brought up the idea of a MarsCoin back in December 2020 when he suggested that Mars economy will be cryptocurrency-based. 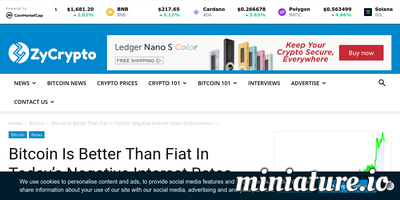 Bitcoin Is Better Than Fiat In Today’s Negative...

Tech Stocks Under Pressure Due to Rising Yields
4

'Play by the rules or we will shut you down,' says NY AG to crypto industry