With Bitcoin reaching $11,000 for the first time in almost a year, a lot of predictions are pointing towards a more bullish growth. This, despite data revealing extreme pressure at that price level.


However, a post from Kraken’s Head of Growth Dan Held reveals that the number of dormant addresses in a year has recently hit an all-time high of 63%.


Building on the work created by Unchained Capital, the 1Y+ HODL Wave groups Bitcoin by the time since its last transit between wallets. The chart shows the ratio of Bitcoins that have not moved from one wallet to another for at least a year. This is represented by the orange trendline with the blue line being the price of Bitcoin.


Viewing the data, one can see that when the Bitcoin price goes up, the percentage of dormant wallets also accelerates. An aberration happened on March 12 (the day of the infamous wide-market crash) when the chart did not report a drastic change in the 1Y+ wallets. Also, at Bitcoin’s new ascent back to $11,000 (the new 2020 high), the number of 1Y+ wallets did not falter but actually increased.


This could imply that the 1Y+ wallet owners are anticipating more upside in terms of the Bitcoin price.


But are the hodlers correct? There aren’t a lot of bearish predictions these days. One of the most popular bullish graphs based on the Stock-to-Flow (S2F) model created by “PlanB” is predicting that Bitcoin will visit $30,000 this year.


The model, which evaluates the current stock of a commodity against the flow of new supply, is tested with other scarce commodities like gold. Bitcoin, while scarce, also has a fixed supply — 21 million BTC and nothing more. The model predicts Bitcoin will hit $100,000 by 2021. 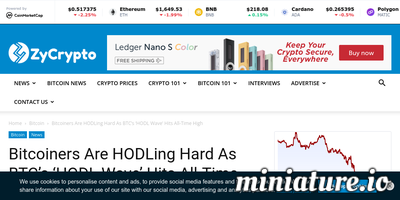 Adam Back: Some ICOs Funded Useful Research Despite Being Unethical