Home /
Crypto Currencies World /
‘Black Swan’ Author Criticizes Bitcoin: “Something That Moves 5% A Day, 20% In A Month — Cannot Be A Currency”

‘Black Swan’ Author Criticizes Bitcoin: “Something That Moves 5% A Day, 20% In A Month — Cannot Be A Currency”

While many are making a turnaround on their bearish Bitcoin take, the man who authored one of America’s best-selling epistemological books “The Black Swan” has branded Bitcoin a Ponzi scheme. It came as a shock to many when Nassim Nicholas Taleb who had previously spoken of the asset in a good light, told CNBC’s squawk box that Bitcoin was a gimmick.


With Billionaires like Paul Tudor Jones running to bitcoin to hedge against inflation, and many other notable figures proposing Bitcoin as a fitting substitute for fiat, one would expect that this narrative would be backed by many more prominent fintech personalities. But this is not the case with Taleb. Simply put, Bitcoin doesn’t cut it for him, as far as inflation is concerned.


Bitcoin is already being branded as a standard economic currency by many. Earlier this year, JPMorgan and other similar finance firms reported that investors were choosing Bitcoin over gold continuously. But Taleb is likely to disagree with their decision, as he asserted that the leading asset is not positioned to be associated with the economy in any way. Regardless of this, Taleb acknowledges Bitcoin’s cryptographic design.


“It’s a beautifully set up cryptographic system. It’s well made but there’s absolutely no reason it should be linked to anything economic.” He explains.


Bitcoin’s upsurge from $11,000 in October of 2020, to over $60,000, has been enough to convince many naysayers to backpedal on their initial bearish take. Many fintech skeptics had changed their stances, collectively explaining that they had either spoken too quickly, as they had viewed Bitcoin as a bubble and a trend at best.


Surprisingly, the opposite is the case with Taleb, who was previously a derivatives trader, now takes up the role of a scientific advisor to hedge fund Universa Investments.


“I bought into it … not willing to have capital appreciation, so much as wanting to have an alternative to the fiat currency issued by central banks: A currency without a government, I realized it was not a currency without a government.” He said, backtracking to his previously bullish sentiments. “It was just pure speculation. It’s just like a game … I mean, you can create another game and call it a currency.” He concluded.


Bitcoin may be a catch for some of the wealthiest people in the world, but for some others, despite its continuous growth, it is simply not their cup of tea. 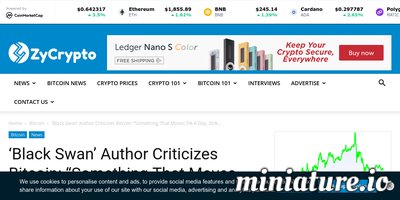