Bosch Files a Patent for Digital Payments on IOTA

Patent filings pertaining to blockchain technology tend to generate a lot of buzz. Bosch, a well-respected company, is now filing a patent for a digital payment system on IOTA.

Most people know that IOTA uses different technology compared to other cryptocurrencies.

The Tangle has proven to be of great interest for various companies.

Bosch is one of those firms effectively filing patents for projects built on top of IOTA.

That is an interesting option, as Bosch is a well-known manufacturer of various pieces of hardware.

Exploring payments in between such devices would be a great boon for the IoT industry.

As far as patents involving IOTA are concerned, over 110 filings have been recorded to this date.

It is evident that the developers of this project are checking  a lot of the right boxes for onlookers.

How all of this will affect the ecosystem as a whole, remains an unanswered question.

When targeting the IoT industry, it is often a waiting game before anything significant occurs.

In terms of the MIOTA price, it seems unlikely that the Bosch patent will make much of a difference.

All markets remain rather bearish under the current circumstances.

The post Bosch Files a Patent for Digital Payments on IOTA appeared first on The Merkle Hash. 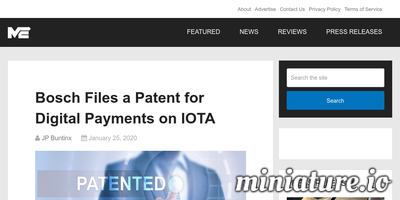 2020 Market Forecasts for Blockchain in Health...