The Finance Ministry of Russia has proposed some amendments that could ban cryptocurrency use in the country. The passing of the new draft bill could be catastrophic for the bitcoin miners in Russia as it aims to prevent them from being rewarded in crypto for the work they put in.


According to a September 3 report by local media outlet Izvestia, Russian’s Ministry of Finance has submitted a new draft for interdepartmental approval which would make it unlawful to receive cryptocurrency such as bitcoin and ethereum as a reward for verifying transactions on the blockchain networks.


To put matters into simple context, crypto mining activities in Russia will not be deemed illegal. However, receiving mining rewards would be forbidden. This undoubtedly makes bitcoin mining a meaningless economic activity.


If the draft bill is passed to law, individuals and entities will be barred from conducting any cryptocurrency transactions. The bill, however, mentions three unique scenarios in which Russians would be allowed to receive digital currencies: via inheritance, receipt of crypto in a bankruptcy matter, and as compensation after winning a legal proceeding.


Besides the aforementioned scenarios, any other transaction involving cryptocurrency would be seen as an offense punishable by law. In particular, a Russian citizen found transacting in crypto will be fined 100,000 rubles (equivalent to 1,324 dollars) and serve a seven-year jail term. Legal entities may be slapped with a fine of approximately 1,000,000 rubles (around $13,245).


The newly-proposed rules looking to amend the crypto bill signed into law in July 2020 by the country’s leader, Vladimir Putin.


However, it should be noted that cryptocurrencies have long remained a grey area in Russia, whereby there is no particular legal framework that has been set forth for crypto. Even so, Putin has in the past called crypto a magnet for nefarious activities.


Furthermore, unlike other countries across the globe like China that are already developing their own digital currencies, Russia’s central bank is not too keen on issuing its own national digital currency in the near future.


And the new draft bill proposed by the Finance Ministry is more likely to add fuel to the flame. A managing partner of the law firm EK&P, Efim Kazantsev, told Izvestia that the new bill is “extremely tough and, in fact, establishing a total ban on the circulation of cryptocurrency in Russia.” 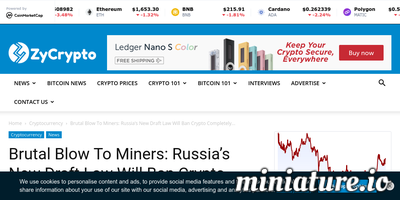