BTC Reaches a Whopping $40,000, Industry Exec Says ‘Bitcoin Rises in the Eye of a Perfect Storm’ The price of bitcoin has astonished the masses once again surpassing $40,000 per coin across crypto exchanges worldwide. With well over $28 billion in global trade volume, the leading crypto asset’s overall market valuation is now a whopping $728 billion in value.

On January 7, 2021, Bitcoin (BTC) has surpassed its previous all-time high (ATH) it reached earlier in the day, and has jumped over the $40k handle on Thursday afternoon. The crypto asset’s dominance index compared to the value of the rest of the crypto economy is 68.8% today. The price has spiked $20,000 higher than the prior ATH captured three years ago in 2017. On Thursday, bitcoin (BTC) touched a high of $40,382 at the time of publication.

There’s currently 18.5 million BTC in existence (88.54%) and there’s only 13.51% left for bitcoin miners to mine. As news.Bitcoin.com reported during our last market update, BTC’s hashrate has been riding very high. The overall hashrate has been fluctuating between 150 to 160 exahash per second, as miners are dedicating a lot of processing power to the chain. Miners today only get 6.25 BTC per block reward and the bitcoin inflation rate per annum is only 1.78% with 900 BTC issued per day.

The next Bitcoin (BTC) halving is expected in 1,215 days or on or around May 7, 2024. At that time the bitcoin inflation rate per annum at the next block halving event will be 0.84%. While the global economy is uncertain, Gavin Smith, the CEO of Panxora thinks that market players are protecting their wealth with the leading crypto asset.

“It’s no surprise that the world is watching bitcoin right now. Its price is soaring as the after-effects of the COVID monetary stimulus continues to raise concerns about inflation,” Smith said as BTC was nearing the $40k handle.

As a result of quantitative easing, market players are adopting bitcoin to hedge against instability. But while further growth is inevitable, investors should not expect this to move in a straight line.

The CTO of Bitfinex, Paolo Ardoino, says that “bitcoin is rising in the eye of a perfect storm” commenting on BTC’s meteoric rise on Thursday.

“The backdrop is one of continuing global macroeconomic uncertainty that has the potential to devalue fiat currencies. High finance’s embrace of the digital gold narrative may potentially be followed by retail as the market cap of all cryptocurrencies reaches $1 trillion for the first time,” the Bitfinex CTO added.

Meanwhile, over the last 90 days, BTC has been one of the best performing assets worldwide climbing more than 250% during the last three months. Paired against the U.S. dollar, bitcoin (BTC) has jumped well over 375% over the course of the year. At press time the price is riding well over the $40k zone and continues to ride upward.


The post BTC Reaches a Whopping $40,000, Industry Exec Says ‘Bitcoin Rises in the Eye of a Perfect Storm’ appeared first on Bitcoin News. 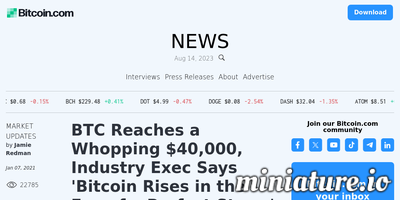