Cardano, Bitcoin SV, and Bitcoin Cash Price Analysis – Crypto Market Is Struggling to Keep Up With the Bulls

After a sharp drop last month, the cryptocurrency market has been maintaining the sideways momentum surprisingly well. Let’s take a look at some cryptocurrencies and see if the charts have anything in store for us.

ADA recently surpassed the $0.0394 resistance level after settling above the significant support level found near $0.0386. ADA/USD pair’s bullishness has thereby given an intraday increase of 2.27%. After shifting impressively from $0.0387 to $0.0396 level. Besides the recent price, recovery could improve the coin’s trust towards investors, which may improve their sentiments.

Afterward, a bullish trend line was also observed that confirmed an extension of upside correction. Also, the fact that the support and resistance level has been upended to $0.0396 to $0.0399 signifies a substantial increase in buying interest over the intraday. The technical indicators are currently giving positive expectations. With the short-term SMA currently above the long-term SMA. The RSI is also above average that foreshadows further upside correction.

On an hourly chart, BSV/USD pair traded sideways after undergoing a bullish run. However, despite the ranging mode, the pair’s price has succeeded in breaking above the $105.000 resistance level.  Pushing new resistance level near $113.831 that showed that buyers are dominating the momentum. Besides, the price is currently struggling to break above $113.831 resistance level that may test $120.000 level in the near term.

Conversely, the bullishness may end since the RSI is giving an adverse scenario as it is declining at a stronger pace that signals a bearish pressure.  If the price drops below average that is level 50, a trend reversal to likely due to high interest in lower digits. At the press time, both moving averages are above the price, and the long-term SMA has managed to cross above the short-term SMA that suggests a bearish outlook.

BCH/USD pair is also on a sideways trend and has been consolidating gains between critical support and resistance level found near $229.21 and $235.5 levels. The pair’s price has, however, dipped by 0.26% over the last 24hrs, after escalating from $231.4 to now changing hands at $230.8.

In terms of the technical indicators, the moving averages are at the moment, raising a bearish alarm with the long-term SMA above the short-term SMA.  The RSI has also dipped, having moved from the overbought territory to trade near average. It might be very disappointing to the investors if the RSI drops below average, for it may lead to further downside correction.

The post Cardano, Bitcoin SV, and Bitcoin Cash Price Analysis – Crypto Market Is Struggling to Keep Up With the Bulls appeared first on The Merkle Hash. 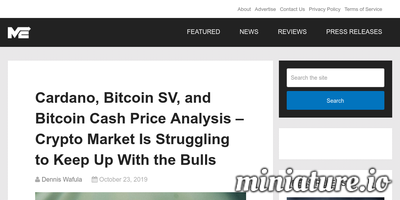