The blockchain surveillance firm Ciphertrace claims to have created the “world’s first” monero tracing tools for law enforcement. According to the company announcement, Ciphertrace developed forensic tools for the U.S. Department of Homeland Security (DHS) in order to track illicit monero transactions. Despite the firm’s claims, there is zero evidence provided that prove the company actually has such tools.

Since the open-source cryptocurrency was first invoked in 2014, the Monero (XMR) project has been heralded for privacy-centric techniques. The digital asset network uses enforced privacy for all transactions by leveraging concepts like ring signatures, bulletproofs, and stealth (one-time) addresses.

Due to the privacy-centric enhancements, the digital currency XMR has gained notoriety on darknet markets (DNM), as monero represents a great share of DNM transactions.

However, Ciphertrace, a blockchain intelligence firm that works with global law enforcement and regulators, claims it has a tool that can “trace and visualize Monero transaction flows.”

Ciphertrace notes that monero is represented on 45% of all DNMs and calls it the “second-favorite cryptocurrency of choice among criminals.” Dave Jevans, CEO of Ciphertrace says that while people think it is nearly impossible to identify true sources, the company has been working for a year studying the Monero network.

Jevans reveals the company has created tools for law enforcement to help uncover illegal monero transactions but there’s still a lot of work that needs to be done.

“Monero (XMR) is one of the most privacy-oriented cryptocurrencies,” Jevans stressed. “Our research and development team worked for a year on developing techniques for providing financial investigators with analysis tools. There is much work still to be done, but Ciphertrace is proud to announce the world’s first Monero tracing capability. We are grateful for the support of the Department of Homeland Security’s Science & Technology Directorate on this project.”

However, the press release provided by Ciphertace published on August 31, 2020, provides zero evidence of any monero-tracing tools. The announcement is merely a claim that the company has such tools, but there are very few reasons provided in the announcement to believe it.

Despite the announcement, crypto-community members have a hard time believing that Ciphertrace actually has a grasp at tracking XMR transactions. “There’s no reason to believe that Ciphertrace has discovered a substantially novel or effective method of tracing Monero transactions,” one individual wrote on Twitter.

“There is no reason to think there is anything novel going on here until proven otherwise,” Simmons tweeted. “The most likely answer is they’re using methods developed *by the Monero community to improve Monero* to de-anonymize some specific transactions with external data. The Monero community has long been at the forefront of privacy research in an effort to build stronger tools, as evidenced by the ‘Breaking Monero’ series.”

Simmons continued with a scathing critique of Ciphertrace’s alleged tracing tool statements in the press release and highlights there are “numerous errors in the understanding of Monero in the article.”

“Without details, there isn’t really anything to discuss. Some vague information provided by Ciphertrace in this article is not possible without external data (like KYC information from exchanges),” the monero proponent said.

What do you think about the alleged tools Ciphertrace claims to have against monero’s transaction privacy? Let us know in the comments section below. 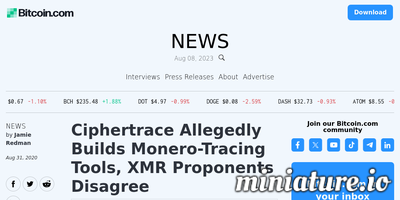 10 Facts About Bitcoin Every Crypto Enthusiast...