COSS Suddenly Suspends all Functionality for 3 to 4 Weeks

When exchanges freeze withdrawals and trading, there is a genuine cause for concern. If that unavailability lasts for several weeks, something is often amiss.

In the case of COSS, everything is going just according to plan.

In the email, it was confirmed that all functionality would be suspended for three to four weeks.

In the same email, COSS mentions how users will be migrated to a “brand new platform”.

While the communication could have been handled better, there doesn’t appear to be any cause for concern.

However, some odd behavior is taking place on the COSS subreddit.

One of its moderators claims how any negative threads are being deleted.

Bitcoin users will be all too familiar with that totalitarian behavior on public fora such as Reddit or Bitcointalk.

The big question is if and when COSS will resume its services.

There is no reason to think that will not be the case, given the current information.

COSS has built up a solid reputation since its inception.

What is possible is how a lot of users will move their funds to a different exchange.

Freezing activity for weeks is not acceptable regardless of the reason for doing so.

They could have allowed users to withdraw funds prior to shutting everything down.

The post COSS Suddenly Suspends all Functionality for 3 to 4 Weeks appeared first on The Merkle Hash. 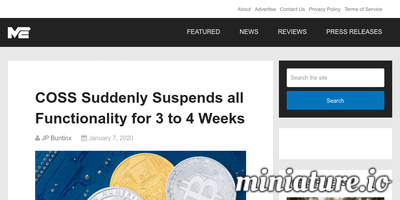 Polkadot Will Finally Launch This Year – But Is the Multi-Chain Network too Late to Catch Ethereum?
3

A look into the growth of USDC
5