In 2017, Bitcoin mania was hitting the general public. The price was rocketing and people were drawn to do some research on the digital asset. The amount of searches and the amount of people buying bitcoin retail has been correlated in the past and we might be starting to see a similar situation arise in 2020.


According to SemRush, search engines are seeing bitcoin inquiries climbing back to where they were in 2017 when BTC spiked to $20,000.


Later, in March 2020 when the price was falling, “Bitcoin” searches on google plunged to only 6.1 million, an 86% percent drop.


Perhaps the most interesting statistic noticed by CryptoCompare’s analysis was that bitcoin related searches experienced a spike in volume when the stock market crashed and the traditional financial sector took a hit.


In March, when the financial world was in serious turmoil, searches for bitcoin jumped to 13.6 million. Many experts in the cryptocurrency field saw this specific search spike as a sign that investors were considering BTC and other cryptocurrencies as a hedge against the volatile stock market.


The reason why most experts believe the price of bitcoin is poised for bullish action in 2020 is the third halving event. The supply for miners has been cut in half and the demand is expected to send the price towards all-time highs. Earlier this year the term “bitcoin halving” reached all-time highs in the volume of searches.


During this time of heightened searches for bitcoin-related terms, the price has been on the rise as well. The relationship between the value of one bitcoin and its popularity on search engines was highlighted back in April by Mike Alfred, the CEO of Digital Assets Data.


“We are hearing and seeing increased retail interest. The unprecedented era of stimulus and money printing has pushed many people toward bitcoin as an alternative monetary system.”


Buying bitcoin is still an oddity for most of the population. During bullish times it’s obvious that more people will be introduced to the idea of digital assets and a flood of newcomers will be compelled to do some real search of their own. 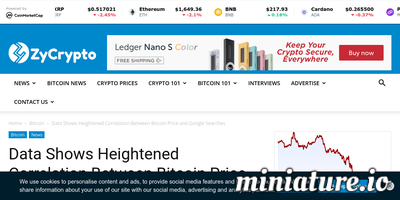 Switzerland : Blockchain Industry And DLT To...