Effects of U.S.’s Trade Deal with China on Tech Businesses

In 2018, Donald Trump sparked a trade war with China by levying a set of heavy tariffs on a wide range of Chinese goods and raw materials. So far, things have only escalated, with the U.S. levying new tariffs and China responding with tariffs of its own. This is causing major impacts on industries that rely on those goods, as well as the broader U.S. economy.

Now, however, it seems like the trade war may be winding down. Last month, Trump and Chinese President Xi Jinping signed the first phase of a deal that aims to solve the issues that sparked the trade war. It will, ideally, lead both governments to lift the tariffs they’ve imposed over the last two years.

While some are breathing a sigh of relief at the prospect of an end to the U.S. trade war with China, others — especially those in the tech sector— are highly concerned about the limited scope of the deal. They had hoped it would strengthen the position of American companies in the global market.

Here is the current state of the trade war, what the new deal changes and why the U.S. tech industry is concerned.

Despite some positives, many in the tech sector — especially microchip manufacturing — are disappointed with the recently signed trade deal.

One of the major desires of the tech sector was for a trade deal that required an end to subsidies and investment from the Chinese government to Chinese companies. American tech industry leaders have long felt that these subsidies gave these businesses an unfair advantage over American companies competing in the global market and have pressured the U.S government to force China to stop.

Some hoped the new trade deal would provide a victory on this front for American business. However, it appears the U.S. government has no interest in forcing China to stop subsidizing Chinese companies — at least for the moment.

As a result, the tech industries have lost in about three different ways over the course of the trade war. These companies have suffered from the tariffs on raw materials needed for tech goods, costing the consumer tech industry an estimated $17.5 billion.

The blacklisting of Chinese companies has also impacted the sector. This has been made worse by the increasing importance of these businesses in tech industries ranging from fintech to telecommunications.

One example that demonstrates these impacts is the American semiconductor manufacturer Micron. While the business had managed to avoid feeling the effects of the initial tariffs, the blacklisting of Chinese companies proved much more threatening.

Nearly 13% of the company’s overall sales are to Huawei — the Chinese telecommunications company that was banned from selling products to the U.S. This occurred after national security officials warned that Huawei technology could be used to spy on American officials and businesses.

Micron, along with other semiconductor manufacturers like Intel, found a way to circumvent the blacklisting. The rule doesn’t restrict products containing less than 25% of certain types of American content, allowing Micron to continue selling to Huawei. The Commerce Department, however, is considering lowering that threshold.

Huawei, banned from buying American semiconductors, has already begun to source Chinese alternatives. Even if the blacklisting is eventually reversed, Micron may have permanently lost a client responsible for almost one-eighth of its total sales if restrictions tighten.

There is still hope, however, for a trade deal that helps out the tech industry.

The trade deal as signed isn’t all bad news for the tech industry or others that have felt the impact of the trade war. Provisions included in the agreement provide American companies with greater recourse for theft of trade secrets by Chinese nationals, as well as stronger protections of their intellectual property. No longer will American companies need to transfer technology as a requirement for doing business in China.

American companies are also likely to breathe a sigh of relief once blacklisted Chinese companies — like smartphone manufacturer Huawei — are once again granted access to American goods.

If the next phases of the trade deal tackle the issue of Chinese subsidies, the tech industry could walk away as a winner of the trade war. It will have secured concessions from the Chinese state that should help American tech companies compete in the global market.

How the Trade Deal May Affect the U.S. Tech Industry

The first phase of a new trade deal has been signed by Trump and Xi Jinping, potentially signaling an end to the U.S.–China trade war. While no more tariffs on Chinese products may be good news for the U.S. tech industry, a lack of provisions regarding Chinese subsidies has many industry leaders frustrated.

There’s no real telling what future phases of the trade deal will look like. While the U.S. government hasn’t signaled interest in tackling the issue of Chinese subsidies, pressure from industry leaders could result in the issue coming up in future phases.

The post Effects of U.S.’s Trade Deal with China on Tech Businesses appeared first on TechBullion. 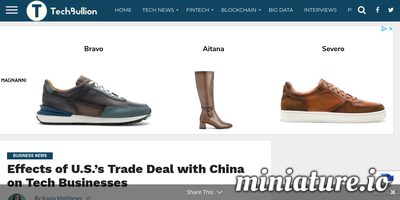