Spacex and Tesla CEO Elon Musk has been trying to get to the bottom of what happened with the popular trading app Robinhood when it stopped people from buying shares of hot stocks, like Gamestop. The shares of these stocks became popular due to the Wallstreetbets movement.

“What happened last week? Why can’t people buy the Gamestop shares? The people demand an answer and they want to know the details and the truth,” Musk said.

Tenev began by explaining the structure of his company. “Robinhood is actually a couple of companies,” he described. Robinhood Financial processes trades, Robinhood Securities clears and settles the trades, and Robinhood Crypto which deals with crypto trades.

The Robinhood CEO detailed that last Wednesday, his platform experienced “unprecedented volume” as “a lot of these so-called meme stocks were going viral on social media and people were joining Robinhood” to buy these stocks. Consequently, the company “received a file” from the National Securities Clearing Corporation (NSCC) Thursday morning at about 3:30 AM PST. It requested Robinhood to “put up money to the NSCC based on some factors,” including the volatility of certain securities. Tenev clarified that “this is the equities business so it’s based on stock trading and not options trading or anything else,” elaborating:

They gave us a file with a deposit and the request was around $3 billion dollars which is about an order of magnitude more than what it typically is.

Musk interrupted Tenev, questioning: “Why is that so high? It sounds like this is an unprecedented increase in demand for capital. What formula did they use to calculate that?”

Tenev replied: “We don’t have the full details. It’s a little bit of an opaque formula but there’s a component called the VAR of it, which is the Value at Risk, and that’s based on kind of some fairly quantitative things … and then there’s a special component which is discretionary so that kind of acts as a multiplier.” Tenev also noted that up until that point, his company “has raised a little bit around two billion dollars in total venture capital,” so the request was “a big number.”

The Tesla CEO interrupted again, asking: “What everyone wants to know is did something maybe shady go down here? It seems weird that you’d get a sudden $10 billion demand in the morning … suddenly out of nowhere.” Tenev swiftly corrected Musk that the number was $3 billion. The Robinhood CEO then emphasized:

I wouldn’t impugn shadiness to it or anything like that, and actually the NSCC was reasonable subsequent to this. They worked with us to actually lower it. It was unprecedented activity.

Musk abruptly asked Tenev: “Is there anyone holding you hostage right now?” Tenev chuckled and replied: “No, no, I’m okay. Thanks for asking.” Both laughed.

The Robinhood CEO proceeded to explain what happened, calling the experience “nerve-wrecking.” He said after receiving the request for $3 billion, his chief operating officer called up someone higher up at the NSCC to discuss what to do. “There was another call and they lowered it to something like $1.4 billion from $3 billion,” Tenev reiterated that it was still a high number. His company then proposed a plan to the NSCC of “marking these volatile stocks that were kind of driving the activity position-closing only.”

Then, at about 5 to 5:30 AM PST, before the market opened, the NSCC came back and reduced the deposit requirement to $700 million, “which we then deposited and paid promptly,” Tenev emphasized. Acknowledging that the move was bad for customers, the Robinhood CEO said, “We had no choice, in this case. We had to conform to our regulatory capital requirements and so the team did what they could to make sure we were available for customers.”

The Spacex CEO further questioned: “Who controls this organization, this clearinghouse?” Tenev replied: “It’s a consortium. It’s not quite a government agency. I don’t really know the details of all of that.” Nonetheless, he emphasized that “To be fair … I think there was legitimate sort of turmoil in the markets … so there probably is some amount of extra risk in the system that warrants higher requirements so it’s not entirely unreasonable.” He noted that lots of other brokers were in the same situation and had to restrict the same activity.

“So it sounds like this organization calls you up and they basically have a gun to your head: either hand over this money or else,” the Spacex CEO summarized, elaborating:

“I think that’s fair. We have to comply with these requirements. Financial institutions have requirements,” Tenev responded. Nonetheless, he suggested that it would be helpful to know the formula the NSCC uses to calculate these requirements so companies can plan better.

Musk proceeded to ask about whether there was outside pressure forcing Robinhood to take the action it did. Tenev affirmed that there is “a rumor that Citadel or other market makers kind of pressured us into doing this.” However, he clarified, “that’s just false,” emphasizing that “this was a clearinghouse decision and it was just based on the capital requirements so from our perspective Citadel and other market makers weren’t involved in that.”

During the same Clubhouse interview, Elon also revealed that he is a supporter of bitcoin and should have bought the cryptocurrency eight years ago. He believes that bitcoin is on the verge of getting broad acceptance by traditional finance people. On Monday, Robinhood raised another $2.4 billion from shareholders after it secured $1 billion last Thursday.

What do you think about the Robinhood CEO’s explanation? Let us know in the comments section below. 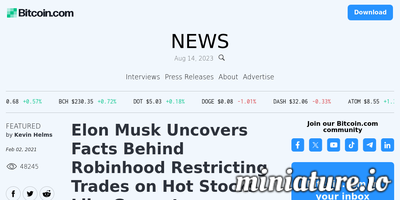 Investing in Bitcoins – An Investment Guide For...