They will debate the ‘Future of Digital Money’ and examine the trigger points that could lead to the ubiquitous use of cryptocurrencies as a means of payment, store of value and settlement.

Following recent news from Paypal, Tesla and Square that they are now accepting crypto as a means of payment, the future of digital money is being debated widely from Central Bankers to crypto investing enthusiasts.

The increasing adoption by institutional investors, and the widening acceptance of crypto as a settlement currency, has seen the market value of the asset surpass $2 trillion for the first time in its history.

During a live event on April 21st, Ver and Byworth will look at the drivers of crypto market value growth, potential headwinds and the progression of two of the best-known cryptocurrencies, Bitcoin and Bitcoin Cash.

The webinar follows the decision by the EQUOS Listing Committee to approve the listing of Bitcoin Cash, which was initially supported by Roger Ver, on EQUOS in March.

The listing followed careful consideration by the committee, which analyses every coin and its underlying blockchain to assess it for its utility, degree of decentralization, current usage and transaction flow, ongoing development effort, innovation over other blockchains and its long-term prospects.

As a core objective, EQUOS aims to list quality projects that align with its own core values of transparency, fairness, innovation and compliance.

“I am looking forward to a very interesting debate with Roger on this webinar. We are at an inflection point for crypto, where we expect adoption and use cases to grow exponentially. The increasing acceptance of digital assets and deflationary monetary policy is driving investors into this asset class,” says Byworth.

This press release is provided by Diginex Limited (“Diginex”) for information purposes only, is a summary only of certain key facts and plans of Diginex and includes forward looking statements that involve risks and uncertainties. Without limitation, the press release does not constitute an offer or solicitation in relation to any securities or other regulated products or services or to make use of any services provided by Diginex, and neither this press release nor anything contained in it will form the basis of any contract or commitment whatsoever. The contents of this press release have not been reviewed by any regulatory authority in any jurisdictions. Forward looking statements are statements that are not historical facts and are subject to risks and uncertainties, which could cause actual results or outcomes to differ materially from the forward-looking statements. Most of these factors are outside of Diginex’s control and are difficult to predict. Factors that may cause such differences include, but are not limited to: the ability to recognize the anticipated benefits of the business combination; the ability of Diginex to grow and manage growth profitably; Diginex’s limited operating history and history of net losses; Diginex’s ability to execute its business plan; the inability to maintain the listing of Diginex’s shares on Nasdaq; Diginex’s estimates of the size of the markets for its products; the rate and degree of market acceptance of Diginex’s products; Diginex’s ability to identify and integrate acquisitions; potential litigation involving Diginex or the validity or enforceability of Diginex’s intellectual property; general economic and market conditions impacting demand for Diginex’s products and services; and such other risks and uncertainties indicated in Diginex’s Shell Company Report on Form 20-F, including those under “Risk Factors” therein, and in Diginex’s other filings with the SEC, which are available on the SEC’s website at www.sec.gov.

In addition, any forward-looking statements contained in this press release are based on assumptions that Diginex believes to be reasonable as of this date. Diginex undertakes no obligation to update any forward-looking statements to reflect events or circumstances after the date of this press release or to reflect new information or the occurrence of unanticipated events, except as required by law. 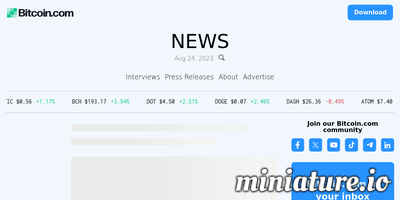 Did Elon Musk Just Suggest Tesla Is Dumping Its Bitcoin?
2

Elon Musk On Why Dogecoin is Superior to Bitcoin