ETH 2.0: Vitalik Buterin Explains How The Future Of Ethereum Will Evolve

When discussing potential roadblocks to blockchain adoption, scalability is often one of the first issues brought up. As the birth of ETH 2.0 nears, Ethereum’s creator Vitalik Buterin says that scalability will not be a threat to its success.


In a tweet, Buterin explained how the future of Ethereum will evolve.


“ETH2 scaling for data will be available *before* ETH2 scaling for general computation. This implies that rollups will be the dominant scaling paradigm for at least a couple of years: first ~2-3k TPS with eth1 as data layer, then ~100k TPS with eth2 (phase 1). Adjust accordingly.”


Ethereum has been slammed sporadically by critics due to slow transactions and a bloated network. The popularity of the game CryptoKitties was widely blamed for slowing down the entire network and causing issues for users trying to send or receive ETH. Just last year Buterin admitted that scalability could be a problem for the Ethereum network. He admitted being aware of the potential issues that could arise from the lack of Scalability.


“Scalability is a big bottleneck because the Ethereum blockchain is almost full. If you’re a bigger organization, the calculus is that if we join, it will not only be more full but we will be competing with everyone [else] for transaction space.”


“There is pressure keeping people from joining, but improvements in scalability can do a lot in improving that,” Buterin added.


After making this statement in August of 2019, Buterin seems confident that they are going in the right direction.


Scalability is an important factor as the launch of ETH 2.0 closes in, but it’s hardly the only highly anticipated feature. Staking is an extremely important feature that many in the cryptocurrency space have been long awaiting.


In reaction to the future staking abilities the Ethereum network will bring to the table, the blockchain DeFi world has been getting flooded with investors. As each of these widely sought after features becomes closer to reality, the buzz surrounding Ethereum becomes a little more noticeable. 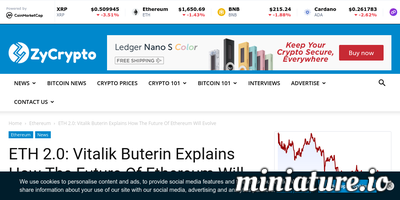 Protected: How Electroneum is Changing the...

A short analysis of staking on Cosmos