By Friday, February 21st, emotional sales in the ETH have stopped. The digital currency is stabilizing around $260.75.

On H4, the Ethereum demonstrates the development of a correctional phase shaped as a Triangle. The Triangle is forming around 61.8% Fibo in relation to the previous downtrend. Judging by the descending dynamics of the MACD, the market is preparing for a decline in the mid-term. The current market situation along with the indicator dynamics hints on a potential breakout of the lower border of the Triangle and a decline to 50.0% ($221.55) and 61.8% ($205.90). Not excluding the possibility of a breakout of the upper border, we should consider growth to 76.0% ($303.80) in the mid-term.

On H1, we should note a bounce off the lower border of the projection channel, confirmed by the Stochastic. Here, we might expect growth to the upper border at $286.15. However, according to the signals from longer timeframes, another declining wave to $248.20 should follow, then a test, and then, perhaps, a breakout.

While the market is busy correcting and stabilizing by technical signals, investors are paying attention to the fundamental news.

For example, hacker attacks on the bZx were noticed. The frauds captured the ETH for about $1 million. It is known that the hackers snatched 3581 ETH and spent almost nothing on designing the scheme.

According to the detailed analysis of their strategy, they spent $8.71 on the first attack, paying the fees for the transactions. In the second case, the frauds used a manipulative approach. The representatives of bZx say that they have come to all the necessary conclusions and are going to introduce the Chainlink system to the service for such situations to be never repeated in the future.

As for the ETH itself, fraud schemes are unlikely to undermine the reputation of the cryptocurrency because they are not explained by any breaches in its security.

The ETH is protected from a more serious decline by the investors’ expectations from the launch of the Ethereum 2.0. The market is, indeed, counting on the second version of the crypto network as it will provide for making money more efficiently: at least, by passive storage of the digital money. However, the date of the launch is yet unknown: it is just scheduled for this year.

Disclaimer: Any predictions contained herein are based on the authors’ particular opinion. This analysis shall not be treated as trading advice. RoboForex shall not be held liable for the results of the trades arising from relying upon trading recommendations and reviews contained herein.

The post ETH Stabilizing After Correction appeared first on The Merkle Hash. 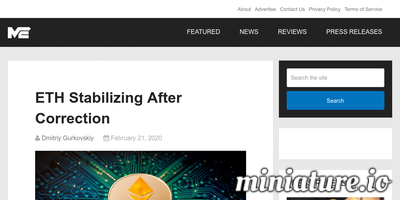