The markets have started the week with a crash. A majority of coins wiped out 5%-10% in the early hours of Monday. Most analysts have explained the move as a quick shakeout triggered by the whales. This has been backed by demand at higher lows as most rebound after heavy buying at these lows. For some coins like Ethereum, these supports have doubled as entry points from which investors can long.


After days of nerve-wracking sideways trading just above the higher $235 support, today, investors’ fears were confirmed as Ethereum broke below the support. This drop was primarily driven by Bitcoin which is still undecided on a long term trend.


Ethereum’s fall led it to the $220 support before rebounding to $225. This is a position that analysts including Crypto Michaël have been calling for, explaining that it would serve as a great entry-level to long the digital asset.


Ethereum has already set a local top at $250 but many believe that fueled by the launch of Ethereum 2.0, the asset will retest its year high of $300. But with prices recently stalling at $240, Michaël believed a retracement would allow new entry and reaccumulation that could provide the needed support to get over $250 and make a long term run at $300.


If investors respond, the current dip could be a major opportunity that leads to topping $250 and further unlocking of the $300 high. But as we noted, the recent correlation between Bitcoin and Ethereum means eyes will still be on Bitcoin and how it behaves in the short term.


Bitcoin Still Solid and In Range


With Ethereum and the wider market still dependent on Bitcoin to set the pace and direction, one analyst has reassured investors all is well despite today’s drop.


According to Rekt, Bitcoin is still trading within its range. Furthermore, he points out there is no bullish or bearish confirmation as long as $9,800 and $8,800 respective levels are not broken.


Today when Bitcoin broke below $9K, there was enough demand to immediately trigger a rebound back to the current $9,400 levels. This shows there is still strong demand and bullish sentiment all around. But as the analysts noted, it all hangs by a thread, with prices now closer to confirming a bearish break down than a bullish breakout. 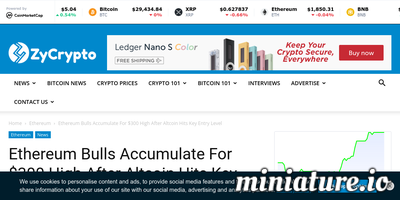 AXP Stock Up Nearly 2% as American Express Got...