Monthly cryptocurrency transfers to and from Africa under $10,000 soared more than 56% from a year ago to reach $316 million in June, according to new research by U.S. crypto analytics firm Chainalysis. Altogether, $8 billion worth of crypto was received into the continent and $8.1 billion sent onchain in the last year.

The total value of retail-sized transfers slowed down somewhat between November 2019 and February 2020 – falling to as low as $147 million – but spiked sharply in the ensuing months, as the hype around Bitcoin’s third halving, which occurred on May 11, started to gather steam.

Chainalysis said the number of small transactions recorded each month climbed 31% to over 600, and 700 by June, with much of the activity concentrated in Nigeria, Africa’s biggest economy and most populous country, along with South Africa and Kenya.

“That relatively small amount of activity [in Africa] is creating life-changing value for users in the region facing economic instability, offering low-fee remittances and an alternative way to save,” observed Chainalysis, in an excerpt of its “2020 Geography of Cryptocurrency Report,” to be released later this September.

The funds are typically moved by individuals and small businesses, it noted. But the biggest drivers of growth inside Africa’s virtual currency economy are remittances and fiat currency devaluation.

Indeed, while some countries are clearing the turf for crypto through soft-touch regulation, others are unwittingly doing the same by failing to contain inflation and maintain liquidity, forcing citizens to take back their financial freedom through alternative currencies, primarily bitcoin (BTC).

For example, the South African rand has lost over 50% of its value against the U.S. dollar in the last decade, Chainalysis stated, “and is consistently one of the most volatile fiat currencies.”

Nigeria, Egypt, Algeria, Ethiopia, and Ghana all face similar issues with their own currencies, it added. In Zimbabwe, government policies have robbed citizens of their savings twice in two decades as the national currency has dramatically shed value.

According to the World Bank, fees for remittances below $200 in Sub-Saharan Africa average 9%, but could be as high 15% in more active economies. The global average is roughly 6.8%. All these factors have driven Africans toward cheaper and trusted alternatives in crypto.

Per the report, around $562 million worth of bitcoin was transferred directly from overseas addresses to ones based in Africa in retail sized payments during the period under review. Chainalysis detailed:

Cryptocurrency can act as a more stable value store for people living under these conditions.

“African users aren’t just using cryptocurrency for overseas transfers between individuals…a significant share of transactions between Africa and other regions — particularly East Asia — are for business purposes,” it added.

In the last year, the continent’s professional market has sent and received more than $210 million worth of crypto, up from about $175 million at the end of July 2019.

In most countries throughout Africa, the virtues of bitcoin are becoming increasingly evident. Whereas alternative currencies are subject to geopolitical considerations and fiscal discipline, BTC investors have little reason to worry about central banks or sanction committees, who are powerless to control a decentralized cryptocurrency.

What do you think about the growing crypto economy in Africa? Share your thoughts in the comments section below. 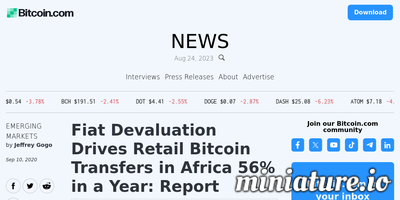 Tezos Recoups at $2.27 Low to Escape the Downtrend