Fidelity has filed with the U.S. Securities and Exchange Commission (SEC) to launch a bitcoin exchange-traded fund (ETF). The ETF will track the price of bitcoin as measured by the performance of the Fidelity Bitcoin Index.

FD Funds Management, a subsidiary of Fidelity, has revealed that it plans to provide financial backing for a bitcoin ETF called the Wise Origin Bitcoin Trust, CNBC reported. On Wednesday, the company filed a Form S-1, a preliminary registration statement for the fund, with the SEC.

The filing explains that the Wise Origin Bitcoin Trust “is an exchange-traded fund that issues common shares” that will trade on a stock exchange, which has yet to be named, adding:

The sponsor of the ETF is FD Funds Management while Delaware Trust Company is the trustee. Fidelity Digital Asset Services LLC (FDAS) is the Trust’s custodian and will hold all of the Trust’s BTC on its behalf, the filing describes. The Fidelity Bitcoin Index PR is designed to reflect the performance of bitcoin in U.S. dollars.

According to CNBC, Fidelity confirmed that it filed a prospectus to sponsor a bitcoin ETF. However, the company refrained from offering further comment due to the preliminary nature of the filing.

In an emailed statement, Fidelity wrote that “An increasingly wide range of investors seeking access to bitcoin has underscored the need for a more diversified set of products offering exposure to digital assets,” elaborating:

The digital assets ecosystem has grown significantly in recent years, creating an even more robust marketplace for investors and accelerating demand among institutions.

What do you think about Fidelity launching a bitcoin ETF? Let us know in the comments section below. 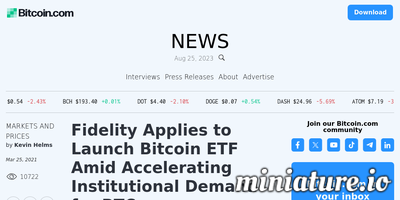 A perfect IT moving checklist for your office move