Gold is aiming for a new all-time high after zooming past $1,800. The last time the precious alloy breached this level was back in September 2011. Following this impressive rally, gold is now approximately 6% shy of its lifetime high.


Bitcoin, by contrast, is still struggling to get a foothold above $10K. Even so, Galaxy Digital founder and chief executive, Mike Novogratz, believes the top cryptocurrency will outperform gold in the future. He, however, cautions investors against putting a majority of their wealth in bitcoin instead of gold due to the crypto’s extreme volatility.


Have More Gold Than BTC: Novogratz


Multi-millionaire and ex-Goldman Sachs partner Mike Novogratz is a well-known bitcoin bull. Earlier this year, he predicted that the flagship crypto will reach an all-time high by the end of the year. He even posited that he would give up on Bitcoin if it didn’t. In a recent interview with CNBC’s Fast Money, Novogratz has reaffirmed his bullishness for the cryptocurrency.


He noted that bitcoin will outshine gold in the future because we are still in the early stages of the adoption curve. The bitcoin advocate acknowledges that it is still quite hard for most people to buy the cryptocurrency. But there are several experts currently working on making it easier, and when this finally happens, BTC will be the crème de la crème.


Regardless, the Wall Street veteran thinks investors should buy more gold and less bitcoin because of the level of risk associated with the big price swings in crypto:


“And so my sense is bitcoin way outperforms it [gold], but I will tell people to have a lot less Bitcoin than they do gold, just because of the volatility.”


Bitcoin rallied from a shade under $4,000 to $10,400 in just two months right before the block halving in May. But since then, the strong momentum has faltered and BTC has on several instances failed to keep its head above $10,000. Moreover, the cryptocurrency’s correlation with the S&P 500 index has grown stronger — tainting its image as a digital safe-haven asset.


Nonetheless, bitcoin’s perception by the traditional finance class is improving. In other words, traditional investors are growing increasingly confident about the asset’s potential in the long-term. For instance, Wall Street hedge fund manager Paul Tudor Jones allocated 1%-2% of his portfolio to BTC just a couple months ago as a hedge against inflation.


In his interview, Novogratz pointed out that the current economic climate where central banks across the globe are printing insane amounts of money is perfect for assets like gold. It’s for this exact same reason that the bullish prognosticator loves bitcoin.


And, perhaps more importantly, bitcoin has noticeably outperformed gold in terms of year-to-date gains. What could possibly stop it from continuing its great ride in the coming months or years? 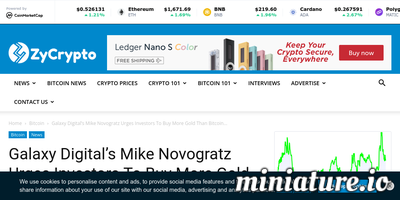