In the cryptocurrency world, most people are in it to make money. Although some users will say they believe in the technology, they represent a minority among the current community base. When trying to make money with Bitcoin and select altcoins, margin trading becomes a very appealing option. However, there are several crucial reasons as to why this option should be ignored, especially by novice users.

Don’t Play With Other People’s Money

For those who are unaware of how margin trading works – in the cryptocurrency industry and elsewhere – the process is really simple. Users will invest a certain amount of funds and try to leverage their position by borrowing additional funds from platform users or the company facilitating this type of behavior. As such, they are effectively gambling with other people’s money, which should already be a good enough reason to not get involved in this particular business model. Especially if things go awry – and they will, eventually – there is a big problem which needs to be addressed accordingly.

Because of the way margin trading works, users will effectively be able to amplify their gains or losses. After all, they will have more money to play around with, which can yield big profits or equally steep losses. The amplification nature of this form of trading is what attracts a lot of [inexperienced] traders to margin trading in general, even though they will not always understand the potential hole they are digging for themselves. This is by far the riskiest way of investing in stocks, cryptocurrencies, or other instruments. It is also the only business model where investors can effectively lose more money than they originally invested, which should deter most people from not even trying to get involved.

Most traders might have come across a certain meme depicting a trading chart and a phone call from “margin” coming in. This is a rather common type of behavior in the world of margin trading, as a margin call will affect virtually all traders sooner or later. When a margin call occurs, the broker will ask the trader to add more money into their margin account to reach the predefined maintenance level. If a trader has a mounting loss, this margin call will occur. The only course of action is to either add more funds to one’s account or getting rid of some of the underperforming assets as quickly as possible.

The biggest concern all margin traders have is how their positions might get liquidated sooner or later. It is not uncommon for this to happen where less liquid markets or assets are concerned. However, the platform one uses for margin trading might also play a role in that regard, as a technical issue on their end could allow positions to be liquidated despite certain thresholds determined by the trader. While such incidents are rather rare, it is always a distinct possibility to take into account. After all, users rely on a third-party service provider for this type of trading, thus anything can happen.

When a trader gets liquidated, their account balance can go in the deep red very quickly. A position can also be liquidated by the broker themselves if the user has violated a part of the margin loan agreement. These liquidations will also be triggered if a user fails to meet the margin call requirements, as the hole they dug for themselves will only get deeper as more time progresses. It is the main reason why novice margin traders lose a ton of money, as they don’t fully understand how this business model works. The best course of action is to borrow less than the maximum limit and investing wisely at all times. Never let greed get the best of oneself, as that is when things can escalate very quickly.

The post Here’s why Margin Trading can Cost you an Arm and a Leg appeared first on The Merkle Hash. 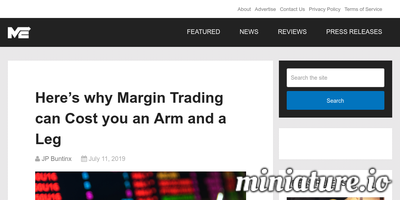