How the Northern Snakehead can Disrupt the US Economy

Invasive animal species can cause their own set of problems down the line. As far as snakehead fish are concerned, they are pretty common in the Georgia region. Some species, however, can pose a genuine problem. The one in question here is capable of breathing air and survive on land. More importantly, it has the potential to disrupt the US economy if left unchecked.

For those unfamiliar with different species of fish, a brief explanation is warranted. The northern snakehead is a species not native to Georgia or most other US regions today. In fact, it is only native to Asia. That doesn’t mean it is as unique as one might be led to believe at first. To date, the species has been found in fifteen different US states, which makes it somewhat common. That is both a good and bad development rolled into one. The fish is far from extinct, but it still poses some big problems.

In a pond in Georgia, the northern snakehead was discovered earlier this month. For a creature that can grow up to three feet in length, it is not one’s average pond fish either. In fact, it is not just a fish, as it can also survive on land by breathing air like most amphibians. It is a very intriguing species, although one that will undoubtedly get a lot of attention in this region over the coming weeks and months.

What is it Capable of?

Although it may sound as if the northern snakehead is villainized, this species doesn’t belong in Georgia. If left unchecked, the long-term consequences can range from competing with other native species, reducing animal populations, affect the health of humans who come into contact with northern snakehead-filled ponds, and even damage the US economy. Especially that latter aspect is of great concern. The trickle-down effect of what this species is capable of should not be underestimated, according to experts.

This situation has been deemed so dire the state department advises everyone to kill the species on sight. It is a very harsh stance toward this species, yet it seems severe action is the only viable option. Those who are a bit more “caring” toward animals may opt to freeze the fish, or record the location where it was spotted and reporting it to a regional fishery office. To this date, it remains to be seen if this species has spread from the one pond it was discovered at. That has not been confirmed at this time, albeit the possibility cannot be ignored.

Killing an animal species on sight should never be an option. However, the northern snakehead seemingly warrants this approach. According to Wikipedia, it can double its popular in 15 months or slightly less. As such, any of these fish left unchecked could pose a problem that grows exponentially worse as more time progresses. Female northern snakeheads can lay up to 100,000 eggs per year. These eggs hatch after just one to two days, albeit that duration is affected by the water temperature.

The snakehead population in the US has been around since early 2002. At that time, it was believed the species was wiped out in the country, yet it reappeared just two years later. Other incidents have been reported in 2008, 2012, 2013, and now 2019. Keep in mind these are only incidents that have actually been reported by fishermen.  In May of 2018, the biggest northern snakehead was caught in Mechanicsville, MD. It was 35.157 inches and weighed 19.9 lb.

Image: “Snakehead – Channa argus” by Brian Gratwicke is licensed under CC BY 2.0

The post How the Northern Snakehead can Disrupt the US Economy appeared first on The Merkle Hash. 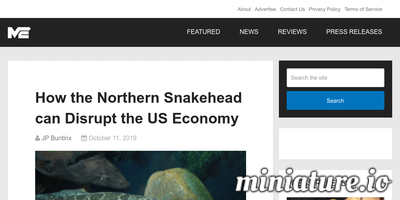 Uncorrelated is Uncorrelated: data continues to suggest bitcoin clearly not a haven asset
2