Is Bitcoin Finally About to Go Mainstream?

For those dedicated crypto-watchers among us, it feels like bitcoin is already a mainstream currency. However, beyond the relatively niche world of blockchain, the impact of bitcoin has been comparatively negligible in recent years. While news of its fluctuating value continues to make global headlines, bitcoin transactions only make up a tiny fraction of a percentage of global exchanges. However, there is plenty of emerging evidence to suggest that 2020 could be the year that bitcoin finally ‘breaks through’ and is accepted as a legitimate global currency.

A Growing Share of the Population Now Owns Bitcoin

Around the world, the number of people who own bitcoin now far outstrips the number of people who own other kinds of non-fiat currency, to the extent that some have talked of an approaching ‘tipping point’. Research has shown that a full 8% of Americans, or about 26 million people, now own some crypto, with bitcoin standing out as the most popular. In addition, about 25% of Americans say they would like to own some crypto in the future, whilst 50% of those people say they would use it on everyday purchases.

Turning away from the Global North for a moment, it is worth paying attention to the astonishing growth of the adoption of bitcoin in emerging markets. While rich countries once constituted the bulk of bitcoin exchanges, the situation has changed dramatically in the past couple of years. Studies have illustrated that the new major players in the global bitcoin market are China, Russia, Nigeria, Colombia, and South Korea. The rate of trading activity in these countries indicates that bitcoin has, in some senses, already gone mainstream.

There are a number of sectors of the economy that have adapted to the bitcoin revolution more than others. One that deserves special attention is the $100 billion a year global gambling market. Thanks to the ease with which bitcoin can be transferred across international borders, it is becoming the currency of choice for fans of online slots, poker, and roulette games. In fact, some major gaming platforms such as BitStarz, of which you can find more details here, offer free spins to those who wish to play their favourite casino games with bitcoin. This kind of normalization was unheard of a few short years ago.

Bitcoin is Being Used in the Tourism Sector

Another sector worth examining when it comes to bitcoin uptake is the global tourism sector. There are a few noteworthy examples, but none are as telling as the case of Germany. As part of its ‘Destination Germany‘ campaign, the official German Tourism Board teamed up with hundreds of businesses to launch a centralized system where tourists can pay for activities, hotel stays, excursions, and transport with bitcoin. This campaign was launched in part to market Germany as an attractive destination for tech investment, further illustrating how attitudes towards bitcoin have softened as national governments begin to take it seriously.

These trends highlight how bitcoin is becoming increasingly central to the global economy. If these developments continue apace, expect to see bitcoin becoming just as mainstream as the Dollar or Euro in no time.

The post Is Bitcoin Finally About to Go Mainstream? appeared first on The Merkle Hash. 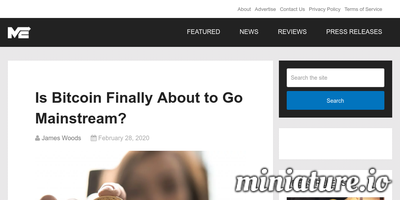 The Billion Dollar milestone has been hit for...

Amwell Files for IPO amid Increasing Demand for Telemedicine
4