John McAfee Says Bitcoin Is an Old, Tired, Worthless Coin That Would Never Hit $1 Million As He Predicted

John McAfee’s “Special Meal” Awaits in December, Unless Bitcoin Hits $500,000. But at a little over $9,000 in Q2, his target for Bitcoin is way off and now that it is time to pay the piper, the renowned bitcoin/crypto advocate is changing his tune.


Unfortunately for John McAfee the internet never forgets and people are increasingly reminding him of his bet and waiting to see how he will navigate his way out of embarrassing himself on national television as he promised.


Recently, a Twitter User brought to his attention an ongoing discussion on 4Chan about his predicament. He asked him:


“There is some degree of debate on 4chan on if and how you’re going to get out of a certain meal at the end of the year, FYI, and apropos of nothing.”


As always, not afraid of controversy, McAfee replied that he never intended to evade the bet, since he never believed Bitcoin would be twice as valuable as his $500K gamble:


“Not going to get out of it. I never believed Bitcoin would hit $1 mil. It’s absurd, ir’s an old, tired, worthless coin.”


Come December, McAfee Will Do Something “Unique”


As previously reported by ZyCrypto, John McAfee made a prediction three years ago on 7/7/ 2017 that bitcoin would hit 500k.


The cryptoverse has been waiting patiently to remind him that Bitcoin is still far from his prediction.  On 17th July the drama started to slowly unfold when Ryan Mac, the Senior Tech Reporter at BuzzFeedNews reminded him that it’s been exactly three years.


“3 years ago today, talk of the town. This is why I don’t make price predictions. Enjoy your dinner John.”


Now that the 17 July is past, people are referencing his bet prediction update in November 2017 in which he modified the terms, which still won’t get him off the hook from delivering, come December. He said:


With his chances of being wrong evidently so high from the current BTC price, John McAfee now says Bitcoin is old and weak and promises the crypto community to wait and see him do something that he promises will be unique. 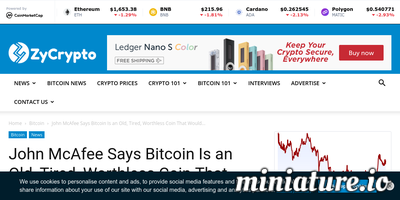 The Intel 8086 processor's registers: from chip...