A California judge has dismissed the $200 million in damages claim against the telecom giant AT&T for alleged negligence and fraud. The judge still ruled the telecom company had to answer the lawsuit by Michael Terpin for enabling the theft of $24 million worth of his cryptocurrency after a company agent gave his sim card to hackers. Terpin filed the lawsuit in 2019.

According to a report, Terpin accused the telecoms giant of “allowing hackers to swap his SIM card, in what appears to be an elaborate scheme by fraudsters.” Terpin, a crypto entrepreneur, also claims that AT&T’s lax security “allowed hackers to enter his wireless account and steal crypto coins worth roughly $24 million.”

For its part, AT&T argues “that it is not responsible for a series of recent SIM-swapping complaints.” Still, the telecom giant details the security thresholds it applied specifically to Terpin’s account and they include placing the “account on a higher security level with special protection.”

According to AT&T, this security threshold “included requiring a six-digit passcode (known only to Terpin and his wife) of anyone attempting to access or change his account settings or transfer his telephone number to another phone.”

In his lawsuit, however, Terpin “attributes the incident to AT&T’s willingness to cooperate with the hacker, gross negligence, violation of its statutory duties, and failure to adhere to its commitments in its privacy policy.”

In its findings, however, the U.S. court “recognized that AT&T disclosed the limits of its security protections and that its privacy policy explicitly states it cannot guarantee that customers’ personal info will never be disclosed as the result of unauthorized acts by third parties.”

Although it is unclear exactly how the thieves replaced Terpin’s mobile SIM, the “lawsuit suggests they impersonated him to AT&T’s customer service agents and requested that the phone number be transferred to their own device.”

After gaining access to his phone number, the criminals were able “to request a password change and reset the security on many of his accounts.” The hackers then “changed the password on his cryptocurrency account and initiated the transfer of digital assets to their own wallets.”

What do you think of the court’s ruling? Tell us your thoughts in the comments section below. 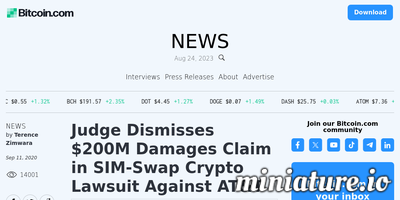