Although he is outspoken, raucous, and bombastic when it comes to his public persona, Sun’s questionable publicity stunts could be part and parcel of his strategy for catapulting Tron into the spotlight and capitalizing on crypto’s momentum.

It’s tough to take Tron’s Justin Sun seriously. His endless shilling on Twitter and use of celebrity endorsements of the likes of Lindsey Lohan are certainly not helping him cultivate an image of blockchain savvy.

Yet, despite his controversial approach, something more interesting is brewing beneath the surface. Even with his limited technological abilities compared to Ethereum’s Vitalik Buterin and Polkadot’s Gavin Wood, Sun has managed to position himself as one of the most successful individuals within the field.

With his brash style of sucking all the oxygen out of the room with his comments or ideas, no matter good or bad, Justin Sun has positioned himself as a mighty successful cryptopreneur. While he is still frowned upon by many within the community for his hollow attempts to stay in the spotlight, there is no doubt that some of his business acquisitions and partnerships have been strokes of brilliance.

Is Sun a More Potent Business Force Than Previously Thought?

Yes, it might sound questionable to be talking about taking Justin Sun more seriously, but in truth, a closer look at his business dealings tells us a starkly different tale. Starting with his $120 million acquisition of Bittorrent in 2018, Sun was on the receiving end of a wave of negative publicity.

As one of the earliest decentralized protocols that arrived long before cryptocurrency, BitTorrent’s global status was still a feather in Sun’s cap given its name recognition and seamless fit within the crypto ecosystem. Eventually, Sun went on to list Bittorrent Token (BTT) on Tron’s blockchain. It turned out to be a smart move. BTT has since rocketed to the 31st most valuable coin by capitalization, with its fully diluted market capitalization now standing over $7 billion.

Beyond this acquisition, Sun’s status as a part-owner of exchange Poloniex, despite his initial denials, is a testament to his ambitions. While it may not align with his public statements of “decentralizing the web,” given that Poloniex is a centralized exchange, it follows other similar moves of seeking to centralize more services under his umbrella.

Tron’s acquisition of Steemit was even more controversial after it was posited that Sun conspired with major exchanges to remove node validators on the dPOS blockchain and replace them with his own. This move effectively centralized a blockchain-based decentralized social media platform. However, despite the uproar and number of users that abandoned the platform, since the February 2020 acquisition, STEEM tokens have nearly risen nearly five-fold.

The latest announcement of integration with DAO Maker reflects another serious move to expand the Tron ecosystem of blockchain-based services. The recently unveiled strategic partnership will see DAO Maker bring all of its cross-chain incubation, fundraising, and growth-oriented services onto Tron. By bringing a retail-focused investing initiative onboard, Sun shows that he intends to make Tron a hyper-competitive chain relative to Ethereum and Polkadot despite its more limited technological acumen.

Sun The Businessman and Centralization Architect

Most of these moves directly conflict with web decentralization activities, as evidenced by the testimony of present and former employees, which highlights some of Sun’s more nefarious efforts to block competition. Yet, despite the ridicule, Sun is still riding high. He may not be blockchain’s best advocate, but Justin Sun has undoubtedly identified it as a money-making opportunity and leveraged it as such as part of his unbridled ambition to rise through crypto’s ranks.

So what do you think – Justin Sun, a crypto hawker or business savant? Let us know in the comments section below. 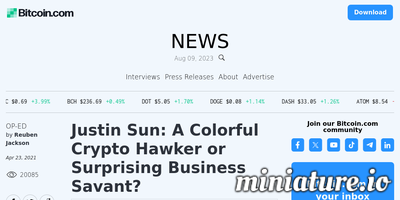 Coinbase Stock Closes 32% Down From High as...

Bitcoin’s Market Structure Broken, But This...

The great tech exodus: The Ethereum blockchain is the new San Francisco
4