Max Keiser: Peter Schiff Is Wrong Again, Bitcoin Is On A Clear Path To $28,000

After some period of stillness and truancy from the crypto space, Bitcoin bull Max Keiser has returned with another bullish prognostication. After Bitcoin crossed $10,000 recently, Keiser says it’s on a clear path to $28,000.


Bitcoin has shown some powerful rising momentum in the last 72 hours, rising from just over $9,000 to almost $11,000 today. This has led to a lot of positive sentiments for the coin in the crypto space, not just for Keiser. There is some skepticism though, expressed mostly by Peter Schiff who is a long term critic of Bitcoin and a strong gold proponent.


Peter Schiff has predicted many times that Bitcoin will go to zero. However, his predictions have not come to pass, at least not yet. Keiser says he is wrong again this time as Schiff believes that Bitcoin “going to the moon” is just a lie told by whales who plan to dump Bitcoins on inexperienced retail traders.


Even now that Bitcoin is rallying, Schiff says it is only a matter of time before it crashes back down as it has always done whenever it rose above $10,000. The question is how low will it crash?


Schiff has ignored every call on him to join the Bitcoin bandwagon for many years because he believes Bitcoin is of no value. However, if Keiser’s prediction plays out, he may be disappointed once again and Bitcoin bulls believe the trend is likely to continue until Bitcoin is worth hundreds of thousands of dollars per coin.


There is a lot of Euphoria about Bitcoin’s recent price pump with a lot of expectations for a future performance like Keiser expects it to be, but some analysts are being cautiously optimistic. NebraskanGooner, a crypto analyst and trader says for Bitcoin to rise much higher, there needs to be a huge consolidation above $10,000. He says this is required for Bitcoin to reach the 2019 high of $14,000 and reach new highs or a dip may be imminent.


The week is still early so it may be too early to tell, but it seems this week will be key in determining the fate of the king coin for more weeks to come. Price currently hovers around $10,800, but whether this will continue for the next few days and weeks remains to be seen. 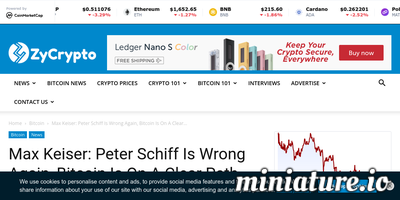 Bloomberg: Ethereum’s Rise is Speculative While Bitcoin’s Price Is Based on Fundamentals
3