The data compares the price when the addresses bought Bitcoin to the current price of Bitcoin’s impressive breakout, which has now averaged $10,292 at the time of writing.


Glassnode also noted that the number of BTC inflows to centralized exchanges has started to increase significantly after Bitcoin reached and fought to stay above yesterday’s sentimental $10,000 level.


Addresses in Profit Above 83%


As the firm points out, the spike represents the biggest movement since the time of the third halving, when more people were betting on BTC’s price to go up:


“Bitcoin inflows into centralized exchanges have started to significantly increase. We are currently seeing the largest hourly net flow spike (24 MA) in over three months.”


In late June, Glassnode reported that BTC addresses in profits had reached 83% from 43% during the Black Thursday in March.


This means that currently, more than 83% of bitcoin addresses have BTC bought at a lower price than what they are worth right now.


While many crypto enthusiasts and traders are positive that the bull market is already underway, it’s worth noting that some top crypto personalities have been awfully quiet.


However, Binance CEO Changpeng Zhao today tweeted that Bitcoin needs to go higher than $10,000, to be impressive.


Another development that could push BTC price over the roof is a new report published by Bloomberg’s Senior Editor John Authers, in which he wrote that there’s an imbalance in the gold futures’ market which could potentially affect other markets.


According to a BTC supporter, BTC’s superiority as a decentralized asset is ready to take more business from the gold market. He said:


“Investors are choosing to physically settle their gold contracts. This is not your typical financial engineering but more like real-life hedging. #BTC’s superior functionality to gold may get a new audience soon.” 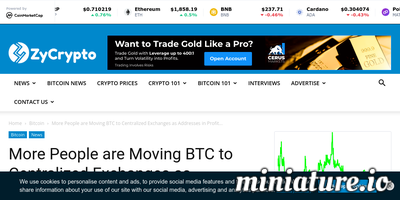 SAP to Take Qualtrics for IPO after Its $8...