Morgan Stanley Investment Management’s chief strategist and head of emerging markets has recommended bitcoin as an alternative investment to stocks amid central banks’ massive money printing policies. He says that alternative assets, like gold and cryptocurrency, could keep doing well while stocks struggle.

Sharma began by explaining that tech stocks and risk assets would really be hurt by rising interest rates. Despite the Federal Reserve’s indication, the strategist believes that interest rates could start to rise “more quickly than we think, possibly even as early as next year.” He explained that we have been seeing “such high stock prices even though the economy is very weak.” Next year, he expects to see the opposite, as the economy rebounds and the covid-19 pandemic is behind us. However, he noted that stocks will struggle “just because of the incredible support they have got from liquidity and interest rates and that support goes away next year.”

When asked about gold and cryptocurrency, Sharma said “it’s a generational thing,” adding that some older investors are still buying gold whereas “some of the younger ones are, the millennials are buying more of the bitcoin and cryptocurrencies.” He added:

Generally I think what that’s telling you is that there is this lingering feeling out there that given what central banks are doing in terms of printing so much money there is a search for alternative assets, I think that these assets could keep doing well.

“Gold, in particular, does very well when interest rates, adjusted for inflation, are negative and I see that environment carrying on for a while,” the chief global strategist predicted, adding that even when inflation comes back, central banks are going to be far behind the curve to do anything about it quickly.

However, he said that “Gold is a very speculative asset,” emphasizing that “in the long term, stocks do much better than gold.” He cited an article on The New York Times suggesting that in the last 100 years, the inflation-adjusted return on U.S. stocks is about 7% a year, compared to 1% for gold.

Nonetheless, Sharma still feels that in the next three to five years, “gold is relatively ok.” Reiterating that “central banks are printing so much money and we want some safety out there,” he elaborated:

To have about 5% or so of your portfolio in gold is not a bad idea, and if you’re a bit more adventurous, and I guess it’s more to do with demographics, then obviously search for bitcoin and other cryptocurrencies.

Sharma is not the only one who believes that central banks’ mass money-printing could boost the price of gold and bitcoin. News.Bitcoin.com previously reported on Galaxy Digital CEO Mike Novogratz and an analyst with Weiss Crypto Ratings sharing the same sentiment. Moreover, Devere Group CEO Nigel Green expects bitcoin to break out this year and macro strategist Raoul Pal believes that bitcoin beats gold on every single measure.

Some analysts have predicted that the outcome of the November presidential election could collapse the U.S. dollar, boosting the price of gold and bitcoin. As the Federal Reserve shifts policy to “push up inflation,” some companies have already turned to bitcoin as a hedge against inflation, such as the Nasdaq-listed Microstrategy.

What do you think about Sharma’s recommendations? Let us know in the comments section below. 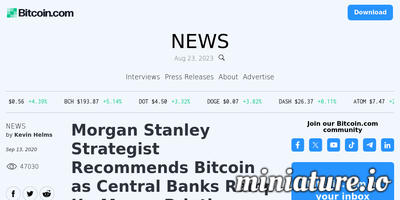 What Are Yearn Vaults And How To Invest In Vaults?