Most Bad Guys Online Are Manipulators, Not Hackers

Every year, there are now at least a couple of really high-profile, major data leaks. Alongside these are the less serious, at least in terms of numbers, breaches that fly under the radar. Laws are tightening around the world and in the EU and the US, there are penalties in place for businesses that breach their legal obligations with regards to disclosing data breaches as soon as reasonably possible after they occur.

The majority of global data breaches occur in North America, but the phenomenon is global. The average cost incurred by a business that is the victim of a data leak is now over $150 million, which is obviously a big incentive for criminals. We don’t know how Covid-19 will impact the world of cybercrime, although there are reasons to think that it might exacerbate some existing issues, and we may see a spike in attempts of cybercrime.

Single groups can lay their hands on the personal data of millions of people with a single sophisticated cyberattack. That data is then easily sold over the darknet if you know what you are doing. The potential profits are huge, especially given the relatively low cost of executing most of these attacks.

However, there are a lot of misconceptions about these data dumps, how they are gathered together, the journey they take to get online, and how they ultimately end up being used for industrial-scale cybercrime.

How Many Hackers Does It Take To Change A Lightbulb?

None? We didn’t notice the lightbulb had changed! When a hacker does their job right, their work isn’t discovered until they are long gone. Some data breaches have only come to light because people’s personal data ended up online. Once the common thread between the victims in a leak is discovered, the target business or entity can then start doing the kind of forensics work that is needed to identify the attack vector used.

As any criminal organization knows, the best way of avoiding detection is to keep the circle as small as possible. Cyberattacks that involve a coordinated attack from multiple directions simultaneously are much more likely to be detected while in progress than a single person picking a digital lock.

Alternatively, the attacker might compromise some physical hardware to harvest data. Examples seen in the last few years include fitting devices to ATMs and card machines that steal the details of any cards that are run through them.

There have been a few attacks in recent years that have involved attackers exploiting weaknesses in the point of sale machines and card payment terminals used by big retailers. By compromising just one device, attackers have been able to spread their malware through entire networks and harvest millions of people’s details.

In either case, a single attacker is able to get their hands on potentially millions of people’s data. But what then? We all know that data is valuable if you have enough of it, but not all data is monetized in the same way. In the case of the personal and financial data that cybercriminals go after, there are a number of potential buyers. It all depends on exactly what data the attacker is able to package together for buyers.

The more data they have, the more it is worth. If you have someone’s credit card details, you can make some purchases at their expense. If you also have the details of the bank account that particular credit card is linked to, you will have all the information that you need to impersonate them or steal their identity.

What Dastardly Deeds Do They Do With All Dat Darn Data?

If you have enough information to steal someone’s identity, the sky’s the limit as far as criminality is concerned. If you have no morals at all then you can cause someone a tremendous amount of trouble by opening accounts in their name. You could open a bank account in someone’s name and use it to set up a fraudulent business, also in their name.

This is why most sensible businesses who are the victims of massive data breaches will offer their customers free identity protection. Identity protection services can help you if someone does try to steal your identity, either by alerting you beforehand or enabling you to respond appropriately.

How Can I Tell If My Information Is Out There?

A successful cyberattack, or even a data leak arising out of negligence, can easily result in millions of people’s data being exposed. It’s not unreasonable to ask how the average person can go about checking whether their data is on the market.

Fortunately, the website haveibeenpwned.com exists. All you have to do is give them your email address and they will give you a report detailing every known instance of your details appearing in a data leak. Once you know what accounts and passwords have been exposed, you can change them on other websites.

How To Stay Safe

Firefox has always been one of the best browsers for keeping its users safe Mozilla has gone the extra mile in recent years. Firefox now automatically checks its users’ details against known leaks to see if there is a match. If you want automatic protection without having to worry, then this is a great feature. Firefox is a great choice for privacy overall if you are concerned about online security.

You should also be aware of a type of cyberattack known as ‘credential stuffing.’ Credential stuffing involves taking the username and password combinations that are exposed in a leak to try to log in to different services. This is why you are told not to re-use your passwords all the time. If you have the same login details for every service you use then it only takes one of them to suffer a data leak and you are vulnerable.

We should all make more of an effort to monitor services like haveibeenpwned to see if we have been impacted by a data leak. Use a password manager to help you generate unique, ultra-strong passwords for each service that you use. In terms of combating the issue, we need to start going after the criminals who are actually engaged in identity theft and financial fraud, not try to chase down ghost hackers.

The post Most Bad Guys Online Are Manipulators, Not Hackers appeared first on TechBullion. 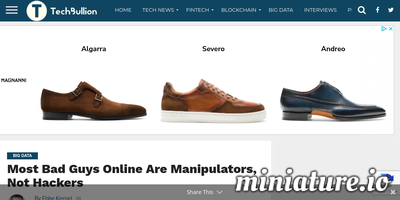 Vitalik Buterin Says Ethereum 2.0 Will Launch ‘Regardless of the Level of Readiness’
2

Binance Coin Swings Up, Attempts to Break Overhead Resistance at $18
5