Scammers have continued to target cryptocurrency users for several years now. What is most worrisome is how so many of these scams are becoming more prolific over time.

The most recent type of scam is apparently spreading on Facebook and other social networks.

Impersonating Anonymous is a Risky Game

A group of criminals is distributing advertisements which seem to be from CNN Money.

In the articles, it is mentioned how hacking group Anonymous is going all-in on cryptocurrency trading.

The group allegedly targets vulnerable markets and tries to make others rich in the process.

In these articles, it is mentioned how Anonymous’ system is completely free to use by anyone.

However, there is no mention of the system or where to find it exactly.

Most people with a functioning brain will notice how these articles are completely fake.

Moreover, the criminals give the real Anonymous a new target in the form of themselves.

As such, retaliation appears to be merely a matter of time right now.

It is unlikely that anyone has lost cryptocurrency due to these fake advertisements.

All of this shows how cryptocurrency users continue to attract the wrong type of crowd.

It appears that their methods are growing more deliberate as time progresses. 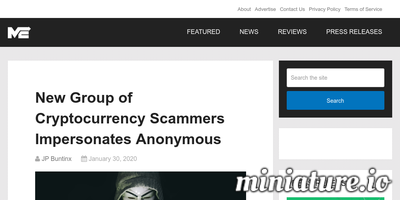 Ripple’s XRP Up 5.5% in Past 24 Hours, XRP Poised to Act as Neutral Bridge Asset between CBDCs
3