Nigeria’s Securities and Exchange Commission (SEC) has revealed that talks with the Central Bank of Nigeria (CBN) regarding the regulation of cryptocurrencies are ongoing. The securities regulator also reiterated that due to a CBN directive that was issued on February 7, 2021, the crypto guidelines it issued in September 2020 remain suspended.

However, the regulator promises that at the conclusion of its engagements with the CBN, stakeholders will be informed of the outcome. Meanwhile, in his comments that were made during a Q1 Capital Market Committee (CMC) virtual conference, Lamido Yuguda, the director-general of SEC, tries to justify the regulator’s decision to suspend its own guidelines. He said:

Because of the lack of access to commercial bank accounts, we had to suspend our own guidelines of September 2020, the implementation of that circular is suspended until these operators are able to have access to Nigerian bank accounts.

He adds this was the only logical step to take since no one can operate “in the Nigerian capital market if they do not have access to a Nigerian bank account.”

Support For All Fintechs

Still, Yuguda claims the SEC is “very supportive of fintechs” after the regulator “invested so much in developing a framework for supporting fintechs in the various areas.” He also adds:

In all other areas, nothing has changed, but in the area of crypto assets, you know that with the recent prohibition by the CBN on access to Nigerian bank accounts by crypto exchanges, that market has been disrupted.

As reported by Bitcoin.com News, the CBN issued a directive that prohibits banks from facilitating transactions that involve crypto entities. The CBN directive appeared to contradict an earlier SEC circular that seemingly endorsed cryptocurrencies. The ensuing confusion soon forced the SEC to abandon its crypto guidelines and to express support for the CBN’s decision.

However, in his latest comments, Yuguda attempts to reassure the crypto industry by stating that the regulator will “continue to engage players and support them to operate lawfully.” Ultimately, the SEC says it wants “to ensure the delivery of safe products and services without stifling innovation.”

Do you think the SEC will succeed in convincing the CBN to back down? Tell us what you think in the comments section below. 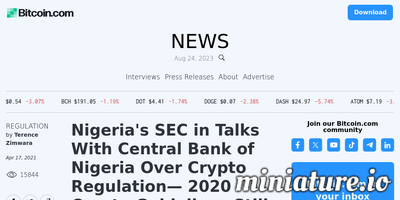