Paypal has confirmed that it has been developing cryptocurrency capabilities in a letter the company sent to the European Commission regarding the EU framework for cryptocurrency markets. Recently, Paypal and Venmo were rumored to soon allow users to buy and sell cryptocurrencies directly.

In a letter to the European Commission (EC), Paypal revealed its work on developing crypto capabilities. The letter was in response to the public consultation launched in December last year on building an EU framework for markets in crypto assets. According to Ledger Insights, Paypal’s letter was published in June, along with a number of other responses the Commission received.

“The crypto-asset industry has experienced substantial growth over the past few years,” Paypal told the EC. “As such, Paypal is continuously monitoring and evaluating global developments in the crypto and blockchain/distributed ledger space.”

In the letter, the company explained its involvement with the Libra project, proposed by social media giant Facebook. Noting that it signed a non-binding letter of intent to participate in the Libra Association, Paypal clarified:

Since the project’s inception, Paypal has taken unilateral and tangible steps to further develop its capabilities in this [crypto asset] area.

The company proceeded to explain that after leaving the Libra project, it has continued “to focus on advancing our existing mission and business priorities to democratize access to financial services.”

In the letter, Paypal claims to have more than 300 million active accounts across the globe, with millions of new users being added every year. The company serves customers and businesses in 31 European jurisdictions and has a license to provide banking and payments services in Luxembourg.

Regarding the EU framework for crypto assets, Paypal told the EC that “The regulatory framework should allow for innovative products and services to be brought to market without undue regulatory burden while simultaneously providing regulatory clarity, guidance, and safeguards.”

Three key points were mentioned. Firstly, Paypal suggested the EU’s crypto framework should have “a clear set of definitions on various crypto activities … to ensure that companies engaged in such activities are properly licensed and regulated.” Secondly, the company called for “a proper application of a risk-based approach, in line with the principles underpinning existing EU AML regulation and global standards,” and lastly “any regulatory framework in Europe should strive to be technology-neutral to support innovation and competition in this fast-evolving space,” the company described. The Financial Action Task Force (FATF) also recommends a risk-based approach to regulating cryptocurrencies and related service providers.

Last month, Paypal and Venmo, a mobile payment service owned by Paypal, were rumored to soon offer direct crypto buying and selling. News.Bitcoin.com reached out to Paypal but the company’s representative neither confirmed nor denied the rumor. Paypal, however, is not new to the crypto space. In 2018, the company filed a patent for an expedited cryptocurrency transaction system. Its CEO, Daniel Schulman, also said in November that he owned bitcoin.

What do you think about Paypal developing crypto capabilities? Let us know in the comments section below. 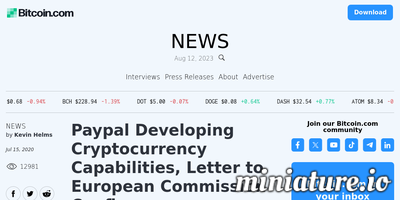 How Digital Investments Can Help The Economy...