Bitcoin is arguably the most secure network in the world. The network’s hash rate is the amount of computing power dedicated to securing it and is often deemed as the litmus test of the overall security. Just days ago, bitcoin hash rate hit a new all-time high, meaning it is next to impossible for bad actors to orchestrate 51 percent attacks.


That said, gold bug Peter Schiff still believes bitcoin can be hacked. In a recent Twitter post, Schiff alluded that bitcoin itself being hacked could be next following a hack that used high-status Twitter accounts to advertise a fraudulent bitcoin scam. The CEO of Euro Pacific then urged his followers to “play it safe” and instead purchase his favorite yellow metal.


In a crazy turn of events, a coordinated large-scale attack took over the accounts of prominent people in the crypto industry at around 19:00 UTC on Wednesday. Within minutes, the Twitter accounts for Binance, Coinbase, Gemini, Justin Sun, Charlie Lee, Bitfinex, The Tron Foundation, Ripple and others, all posted a fake bitcoin giveaway scam linked to an organization going by the name “Crypto For Health”. The posts also asked users to send bitcoin to a specified address with the promise of receiving back double the amount.


About an hour later, the scammers changed their strategy as they took the crypto scam mainstream. They dropped the “CryptoForHealth catchphrase to instead use the accounts of prominent celebrity profiles and companies like Elon Musk, Jeff Bezos, Bill Gates, Barack Obama, Joe Biden, Michael Bloomberg, Kanye West Apple, and Uber. Unfortunately, some people fell for the scam and sent BTC. At the time of publishing this, the scammers’ bitcoin wallet has received BTC worth $118, 590.


Twitter Support later shared a statement, citing that they believe the breach was likely a result of a social engineering attack. During their investigation, the Twitter team was able to discover that the hackers targeted some of the company’s employees with access to internal systems and then used the acquired access to “to take control of many highly-visible (including verified) accounts and Tweet on their behalf.”


Jason Koebler, an editor at Motherboard, VICE Magazine’s tech section, allegedly spoke to two hackers who claimed responsibility for the phishing campaign. One of the hackers noted that they paid a Twitter employee to help in taking over the high-profile accounts.


Tone Vays, a well-known bitcoin trader-cum-analyst took to Twitter to lambast Peter Schiff after his recent post. Vays posited that Schiff believing bitcoin will be hacked just because Twitter was hacked clearly shows he does not understand how the king of cryptocurrencies works.


Also, if you can remember, Schiff made a fool of himself earlier this year after losing access to his bitcoin wallet and blaming the crypto-asset for the loss. At the time, he asserted that his wallet somehow got corrupted and his password became invalid. The bitcoin naysayer, however, later admitted to confusing the pin of his wallet for the password.


We see you, baby boomer. 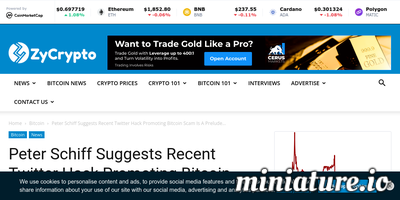 8 Reasons Why Community Development Is...