There are many reasons why the Philippines is becoming increasingly crypto-friendly. Not only has its central bank registered more crypto exchanges recently, but the Securities and Exchange Commission has also been actively finalizing crypto guidelines. The country has an active crypto community, and one of its largest banks has engaged in multiple crypto projects.

The central bank adopted a formal regulatory approach to cryptocurrency through the issuance of Circular No. 944 back in 2017. It requires businesses engaged in the exchange of cryptocurrencies for fiat money in the Philippines to register with the central bank as remittance and transfer companies. Among the registered companies is Rebittance Inc., a wholly owned subsidiary of Satoshi Citadel Industries (SCI), a fintech company building a blockchain ecosystem in the Philippines. Co-founder Miguel Cuneta told news.Bitcoin.com that, besides the 13 registrants, many others are in “in the process of applying.”

In addition, the Philippines has a special economic zone where many overseas crypto exchanges have been licensed to operate. The Cagayan Economic Zone Authority (CEZA) revealed in June that it had licensed 37 crypto exchange operators. In collaboration with property developer Northern Star Gaming and Resorts, the authority has been building “Crypto Valley of Asia” for companies operating in the Cagayan Special Economic Zone and Freeport. However, CEZA’s licenses do not entitle licensees to “sell securities to Filipinos or to exchange tokens into fiat currency,” the authority clarified, noting that a BSP license is needed for such purpose.

Cuneta further shared with news.Bitcoin.com that he believes “The Philippines has always been one of the most crypto-friendly countries in the world,” highlighting several factors.

Firstly, he emphasized that the Philippines is “one of the first in the whole world” where the central bank registers companies wanting to provide services using cryptocurrency. The BSP started registering them in 2017, the same year Japan’s top financial regulator, the Financial Services Agency (FSA), began registering Japanese crypto exchanges. The FSA has registered 19 operators to legally operate crypto exchanges in Japan so far. Moreover, Cuneta elaborated:

We also now have new draft guidelines from our own SEC on ICO fundraising and order-book exchange regulations, paving the way for a more mature ecosystem with our own crypto marketplace for local price discovery.

The SCI co-founder additionally remarked that his country has “an active community and active meetup groups established since 2014.” He also acknowledged that CEZA “allows overseas crypto companies to register and cater to offshore customers.” After conveying various reasons for the crypto savvy image of the country, he concluded that “Definitely, the Philippines is becoming more and more crypto-friendly.” Luis Buenaventura, founder and chief strategy officer at Bloomsolutions Inc., shares a similar sentiment. Describing his country as “one of the most crypto-friendly countries in the world,” he told news.Bitcoin.com: “Not only do we have an actual regulatory framework for crypto exchanges, but we’re also a predominantly English-speaking population that can use all the same tools and apps as North American or European audiences with minimal localization. Thus we tend to be a launchpad for U.S. startups looking to expand in the region.”

As an example, he mentioned popular mobile bitcoin wallet and investing app Abra. The startup has been offering its crypto-to-fiat conversion network in the Philippines since 2016, trialing it in the country first, before expanding to others. Many Filipinos are also trading bitcoin cash on Bitcoin.com’s peer-to-peer marketplace.

Buenaventura estimates that there are approximately two million people in the Philippines who have had some exposure to crypto; some were “caught up in the buying frenzy of late 2017.” He further shared with news.Bitcoin.com:

We have a fairly sizable expat population, mostly Koreans, Chinese, and Japanese so there’s a lot of cross-pollination when it comes to financial technologies and payment systems.

Cuneta also believes that crypto adoption is growing in the Philippines, “at least in terms of the number of on-ramps and off-ramps we have for bitcoin and other cryptocurrencies in the country,” he explained to news.Bitcoin.com. “You can send money, pay bills, buy phone credits, and exchange crypto to fiat using several central-bank licensed exchanges and service providers.” Another factor recognized by the SCI co-founder was that “Banks and other business are also more comfortable working with companies that are licensed by the central bank, unlike when we were starting out in 2014 and banks would just shut down our accounts as soon as they found out we are dealing with bitcoin.” He continued, “In terms of user adoption, we see more sophisticated and knowledgeable users, traders, and enthusiasts as compared to the speculative mania of 2017.”

While asserting that “Bitcoin-as-retail-payment has never caught on here,” Buenaventura opined:

Less than 2% of payments in the Philippines happens digitally so the importance of creating cash-to-crypto bridges can’t be overstated.

Stressing the growing number of places where “people can actively exchange physical cash for crypto,” he disclosed that his company “powers about a dozen physical locations, and they’re all licensed FX outlets, and we’re aiming to be in 50 by the end of the year.”

The Union Bank of the Philippines (Unionbank), one of the largest banks in the country, has engaged in a couple of crypto projects. Following the installation of a bitcoin ATM at its branch in Makati called The Ark, the bank has reportedly launched a stablecoin.

The Philippine Star reported on July 26 that Unionbank had issued “a stablecoin dubbed PHX and became the first bank in the country to conduct transactions using the blockchain technology.” This stablecoin is not to be confused with the Red Pulse Phoenix coin which uses the same symbol. Unionbank backs the value of its coin, which is guaranteed to be at parity with the Philippine peso at all times, the publication conveyed. A senior vice president and head of the fintech business group at Unionbank, Arvie de Vera, revealed that live PHX transactions were implemented on the bank’s i2i platform. Project i2i, which stands for island-to-island, institution-to-institution, and individual-to-individual, is the bank’s clearing system that connects rural banks through blockchain technology. Three banks participated: Summit Rural Bank in Luzon, Progressive Bank in Visayas and Cantilan Bank in Mindanao. Each performed buy, transfer, redemption transactions and domestic remittances using the stablecoin. Initially available only to i2i participants, the coin can be purchased and redeemed by debiting from and crediting directly to their Unionbank accounts. According to de Vera:

PHX is a stable store of value, medium of exchange and is a programmable token with self-executing logic. It enables transparent and automatic execution of payments. The Securities and Exchange Commission (SEC) of the Philippines has published a document entitled Rules on Digital Asset Exchange, which primarily governs the registration and operations of digital asset exchanges accessible in or from the Philippines.

Stakeholders, exchanges, broker-dealers, investment houses, the investing public, and other interested parties had until Aug. 14 to submit their input regarding the proposed rules.

What do you think of the Philippines’ crypto ecosystem? Let us know in the comments section below.

Did you know you can buy and sell BCH privately using our noncustodial, peer-to-peer Local Bitcoin Cash trading platform? The Local.Bitcoin.com marketplace has thousands of participants from all around the world trading BCH right now. And if you need a bitcoin wallet to securely store your coins, you can download one from us here. 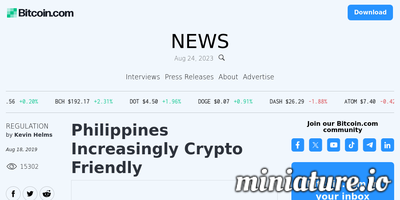