Police forces in Belgium, France and Israel have reportedly put a stop to an international scam promising high returns of up to 35% on crypto investments. A big French private company and a French local authority are said to be among the 85 victims of this network. In total, 10 suspects related to the case have been arrested.

A collaboration of the French Gendarmerie Nationale, the Belgian Police Judiciaire Fédérale and the Israel Police has brought down a large network allegedly involved in money laundering and binary investment fraud, Europol announced. An unnamed person who has already been convinced of carbon tax fraud is suspected to be the mastermind of the scam.

The group allegedly established online platforms promising high returns on investments in cryptocurrencies as well as gold and diamonds. The victims were promised between 5 and 35% return on investment, and the group members pretended to successfully manage their accounts for them in the beginning and then encouraged them to invest more money. A big French private company and a French local authority are said to be among the 85 victims of the network. The scam is believed by an investigator to be responsible for defrauding an amount of at least €6 million. The investigators have also discovered invoices for a few million euros, which the group members had not yet gotten their hands on. More than €1 million have already been seized by authorities from the network’s accounts.

“The criminal group approached victims by phone, offering them huge profits on investments in bitcoins of up to 35 percent,” explained the European Union Agency for Criminal Justice Cooperation, Eurojust. “To gain their trust, victims initially made small gains on these investments, thereby encouraging them to further invest. Victims were then defrauded on subsequent payments. These were transferred to fake companies, which had been set up for this purpose by the OCG [Organised Criminal Group]. The profits were then quickly transferred via bank accounts in other EU Member States to bank accounts in various Asian countries and Turkey.”

What do you think about police forces in Belgium, France and Israel stopping a scam that promised up to 35% returns on crypto investments? Share your thoughts in the comments section below.

Verify and track bitcoin cash transactions on our BCH Block Explorer, the best of its kind anywhere in the world. Also, keep up with your holdings, BCH and other coins, on our market charts at Bitcoin.com Markets, another original and free service from Bitcoin.com. 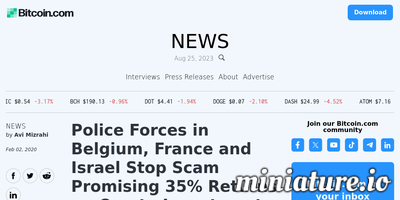 How Art Industry Companies Are Leveraging Blockchain for Their Future
4