On August 18, 2020, the Bitcoin ABC development team announced a “feature freeze,” which will include a new Infrastructure Funding Plan (IFP) and a week later explained it was also initiating a “governance council.” Despite the recent announcements, Bitcoin ABC has lost considerable support and it appears the project will separate from Bitcoin Cash come November 15.

During the last few weeks, there’s been a lot of contention among the Bitcoin Cash (BCH) community. The controversy really heated up after the Bitcoin ABC development team decided to adopt Jonathan Toomim’s ASERT Difficulty Adjustment Algorithm (DAA), but also included the controversial Infrastructure Funding Proposal (IFP) coinbase rule as well. If the rule was to be applied, approximately 8% of the coinbase reward would be set aside for infrastructure development.

However, an overwhelming share of the Bitcoin Cash (BCH) community does not support the IFP integration into the Bitcoin Cash codebase. A great number of big players, early adopters, developers, full node projects, businesses, miners, and crypto executives have all been very outspoken against the IFP addition.

Those who are against Bitcoin ABC’s current direction include a myriad of engineers from full node projects like BCHN, Knuth, Bitcoin Unlimited, Flowee, Bitcoin Verde, Bitcoincashj, and BCHD. Businesses and organizations like Electron Cash, Bitcoin.com, the SLP Foundation, Read.cash, Zapit, Membercash, Lazyfox, and Cashaddress.org. There is now a new Bitcoin Cash web portal called bch.info, which is a directory for all things related to BCH.

ABC’s direction has also caused a number of node operators and miners to start switching over to the Bitcoin Cash Node (BCHN) client version 22.0.0 or later and other non-ABC nodes. So far, an increasing number of miners have written “Powered by BCHN” in the block’s coinbase parameters after they find a block reward. Bitcoin cash miners mining with a non-ABC client include Huobi, Binance, Bitcoin.com, P2pool, Hashpipe, Okex, Easy2mine, Btc.top, and more.

Over the last week, this metric has continued to rise and 53% are using BCHN for the latest consensus rules. Additionally, a number of BCH mining representatives have signed saying they are against ABC’s latest IFP iteration.

Representatives such as Li Pei Cai the founder of Wayi.cn, the miner and developer Andy Chen, BlocksBridge Consulting founder Nishant Sharma, Bitcoin.com’s mining pool, Carson Smith the CEO of SBI Crypto, Alexander Levin Jr the CEO of ASICseer.com, and many more have signed.

“Bitcoin ABC and [Amaury Séchet] have announced they are forking away from Bitcoin Cash on November 15,” Ver stressed. “We wish them good luck with their new coin and thank them for the free airdrop to all [bitcoin cash] holders.”

Additionally, the crypto exchange Coinflex has listed futures for the upcoming airdrop with ABC Coin paired against BCH. At press time, the price ratio for ABC versus BCH futures on Coinflex is 10 to 1 in favor of BCH. It’s likely that as time gets closer to November 15, other crypto exchanges may add futures for ABC Coin and will likely have to reveal airdrop contingency plans.

With Bitcoin ABC splitting away from the BCH community and greater ecosystem in general, exchanges will have to decide whether or not the trading platform will support ABC Coin. Oftentimes over the years, forked coins with little community support and no liquidity have a hard time getting listed on popular exchanges.

A great majority of the BCH community, developers, businesses, and miners have come to the conclusion that Bitcoin ABC has not left this debate up for discussion. Most understand that there is no longer any need to engage in heated debates, as the ABC development team has ultimately chosen to take a separate path.

Furthermore, the team’s former finance manager George Donnelly has also left Bitcoin ABC and has written extensively about how “Amaury Séchet is forking Bitcoin ABC away from Bitcoin Cash.” Many other BCH supporters have also written long posts on the read.cash blogging platform explaining how they do not support ABC’s plan.

As time gets closer, it will be far more apparent that those with skin in the game are fully against the IFP and ABC’s decision. As the CEO of ASICseer.com recently said: “With the existence of BCHN as a mining node, we do not expect any sensible miner to choose to receive 8% less mining revenue.”

If there are any miners that choose to follow ABC’s path, they ultimately will be creating a new airdrop coin for all the Bitcoin Cash investors after November 15. 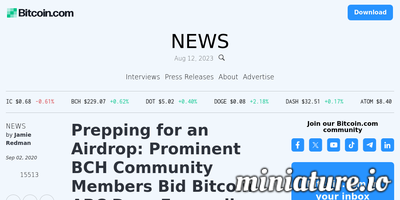 Roger Ver to Bitcoin ABC: Stick a fork in it,...

Exchange Outages Are Going Mainstream: What...